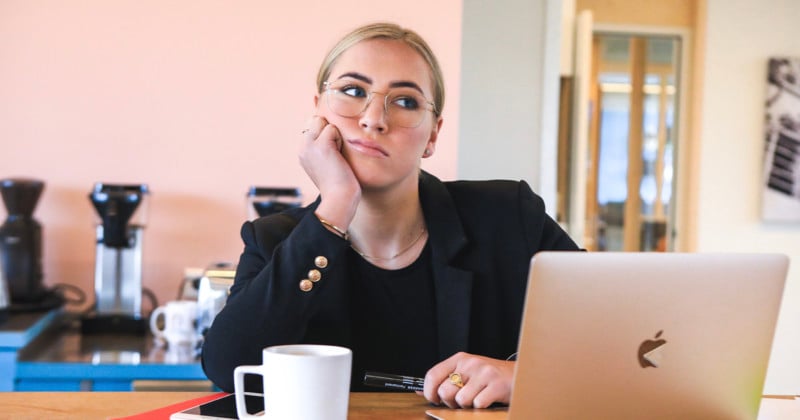 Early on in the pandemic, you may have noticed that commercials did not deviate from norms, which led to a bit of a reality disconnect between viewers and advertisers. Eight months later, that definitely has changed.

According to Adobe’s Stock Creativity Insights, COVID-19 led to notable and trackable changes in both the creative and visual landscapes. Citing its own “State of Creativity” blog post, Adobe noted that 87%t of creatives believe the events of 2020 will have lasting impacts on creative businesses, and 82% went a step further and said that 2020 forever changed how they create. Additionally, 83% agreed that the events of 2020 have made it more important than ever to expand their creative skill sets.

As photoshoots either shut down or dramatically compressed, stock images and video have exploded in popularity, with specific types of images seeing a marked increase in demand. Images of people quickly moved from in-person imagery to feature virtual spaces with 5.7 times more daily searches for “virtual” stock images post-state of emergency (March 14 to Sept. 22) compared to pre-state of emergency (Jan. 1 to March 13).

Even basic search terms changed. Instead of firms looking for “people-in-person,” Adobe noted that “people-on-screens” grew significantly. You can see in the graphic below the kinds of images that became more popular given the months of the year with the search term “people”:

Adobe also cites that in 2020, it noted that meeting rooms and office spaces traded out with video conferencing calls and social distancing imagery. Masked workers briefly took the top licensing spot, but was quickly replaced by remote work imagery. 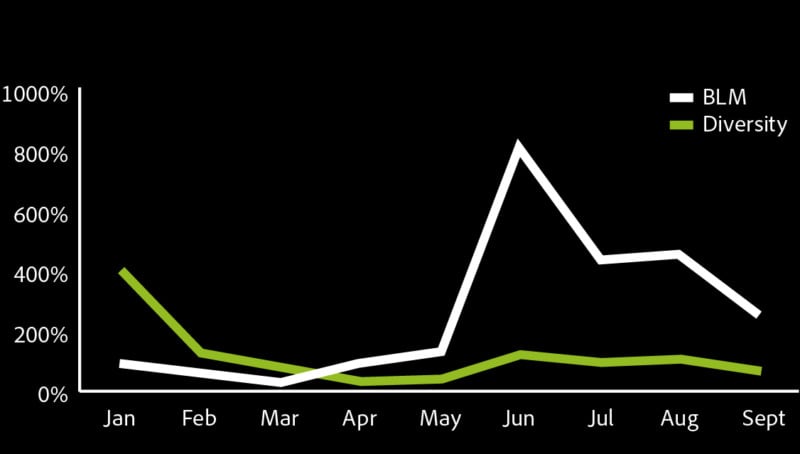 Searches and licenses for “protest” assets reached an apex in June (1,100% MoM growth for searches and 1,000% for licenses), and have seen steady growth YoY going into the fall season, revealing that creatives are taking a stance on social activism.

Gratefully, creators are apparently uploading considerably more content under the term “science” each month, with that segment seeing 147% growth. Adobe states that six of the top ten assets licensed under the science category are coronavirus related, which is down from ten out of ten searches in March. 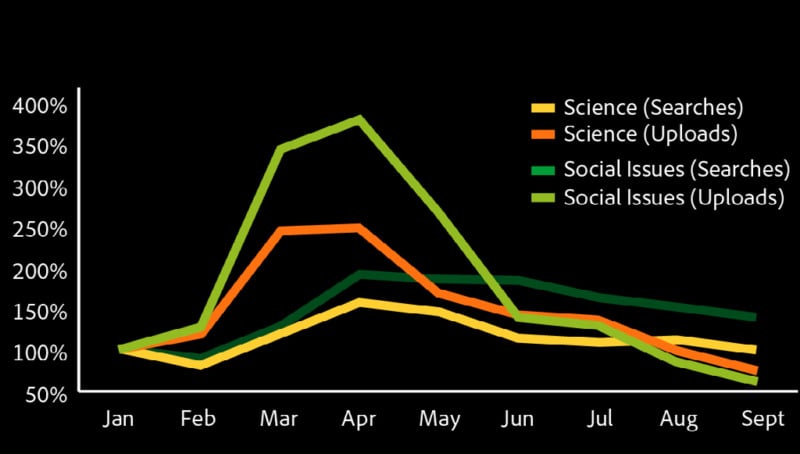 Stock is, generally, one of the worst ways for a creative to make money. In order to gain enough traction to make a notable amount monthly, a photographer would not only have to upload a mammoth number of images, but they would also have to do so expecting to make sales in incredible volumes. If, however, you are the kind of photographer who had to shift your business as a result of COVID-19, data like this can help you understand what kinds of imagery is in demand, and how you can increase your volume within those segments to take advantage of that demand.