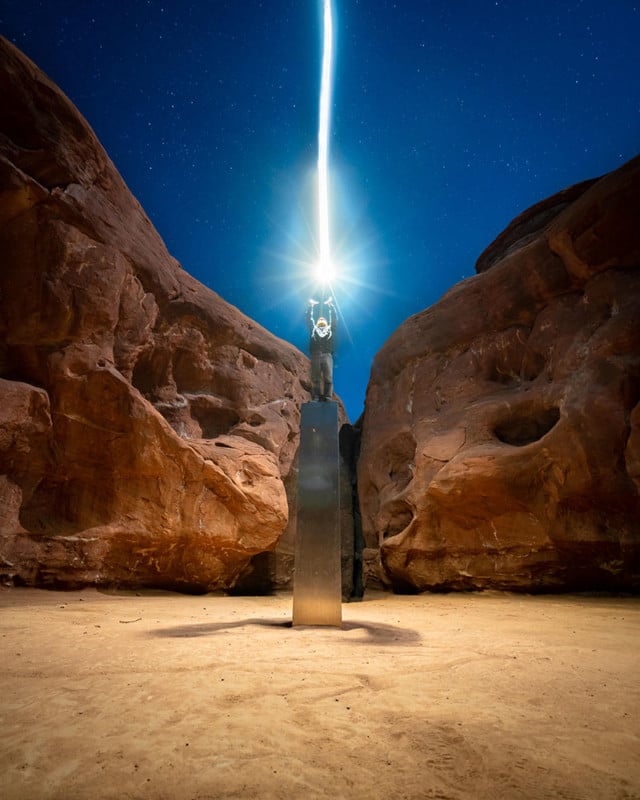 Ross Bernards left Vail, Colorado, in June of 2018 to live the #VanLife full time to provide flexibility and more opportunity to “explore the most photogenic and best-kept secrets of North America” and its iconic landscapes. He feels most at home and a tremendous sense of peace with his feet firmly planted under the stars.

On Friday, Nov 27, Bernards decides to pay the Utah Monolith, a 6-hour drive away, a visit. “I went out there to practice light painting with my drone. I was just trying to learn how to do it, what settings I should use, and really didn’t think much of it at the time I clicked the shutter,” Bernards tells PetaPixel.

Firstly, what is the Utah monolith and why are people upset about it?  The New York Times reported on Nov 24 that “a [helicopter] team surveying bighorn sheep for Utah’s wildlife agency found the strange [three-sided] object, 10 to 12 feet tall [at the base of a barren slot canyon], embedded in the ground in a remote part of Red Rock Country. It’s probably art, officials said.” The helicopter pilot, Bret Hutchings joked that it could be “a big 2001: A Space Odyssey fan”, referring to the Stanley Kubrick film in which curious, increasingly agitated primates discover a matte black slab.

“When I was taking this photo, I honestly had no plans of sharing it,” clarifies Bernards. “Then 30 minutes later, four guys came out and tore it down in front of me. There are so many little things that I don’t like about the photo, but to me, the story was bigger than any of my insecurities about the photo. I really wanted to convey in my message what happened and why its removal was a good thing.”

“Suddenly, around 8:40 p.m., men arrived, their voices echoing in the canyon. Working in twosomes, with an unmistakable sense of purpose, they gave the Monolith hard shoves, and it started to tilt toward the ground. Ultimately, they uprooted it, broke it apart, and carted it off in a wheelbarrow. ‘This is why you don’t leave trash in the desert,’ one of them said, suggesting that he viewed the Monolith as an eyesore, a pollutant to the landscape,” quoting Mr. Bernards in the New York Times.

“To think that I got the last ever photos of it is actually a strange feeling,” expresses Bernards. “While I’m excited about that, I also have a sense of guilt. Like I shouldn’t have been out there in the first place. While I know how to navigate through the desert and strictly practice leave no trace principles, it was removed because people like me, photographers, people on social media flock to these sensitive areas for a shot. It really reminded me that there is always a balance for those of us inspired by nature and to create out in the wild to really use our judgment on what it is we are sharing online and how we share it.”

Two Utah adventure sportsmen, Andy Lewis and Sylvan Christensen, who advocate a “Leave No Trace” philosophy towards nature, have stepped forward to say they were part of the team who removed the Utah monolith.

“The dismantling of the Utah Monolith is tragic— and if you think we’re proud— we’re not. We’re disappointed,” said Christensen on his Instagram post.

In an email to USA TODAY, Christensen said he received “death threats and threats of physical harm and hate speech” following the social media posts.

Photographer Bernards whose motto is “Living my someday, today,” is saddened by the not only hate mail but also death threats that he TOO has received. When I ask him if it is OK to mention this in our PetaPixel report, he is emphatic, “Yes. Yes, you can. Cyberbullying is pretty ridiculous and needs to be called out.”

A similar-looking monolith has now appeared in the small town of Atascadero, on the central California coast. The three-sided obelisk appeared to be made of stainless steel, 10-feet tall and 18 inches wide. The object was welded together at each corner, with rivets attaching the side panels to a likely steel frame inside. Another monolith appeared and disappeared in Romania. So, be prepared to see more of these now!

Sidenote: Notable is the use of the word “monolith.” Upon discovering the pillar, the Utah Dept. of Public Safety described it as a monolith, a term since repeated by other major media outlets. Although the word monolith refers to a single great stone, the word has also become closely associated with the Monolith from the movie 2001: A Space Odyssey, to which the Utah monolith bears a circumstantial resemblance. The blind rivets which the pillar uses suggest a human origin.

Image credit: Photograph by Ross Bernards and used with permission