Last year, PepsiCo’s Mountain Dew made headlines by spending 40% of their marketing dollars to reach a niche audience: gamers. Since then, video games have skyrocketed in popularity, spurred in part by the stay-at-home orders associated with the COVID-19 crisis; in fact, over the summer, Nielsen found that 82% of global consumers played video games and watched video game content during the height of the lockdowns.

As more brands catch onto the potential of incorporating gaming into their marketing strategy, commercial photographers have a new opportunity to tap into this cultural moment in their images. We anticipate that lifestyle photos of individuals, friends, families, and couples playing video games will continue to trend into 2021. Here’s a look at how this trend emerged and how you can integrate it into your Licensing portfolio. 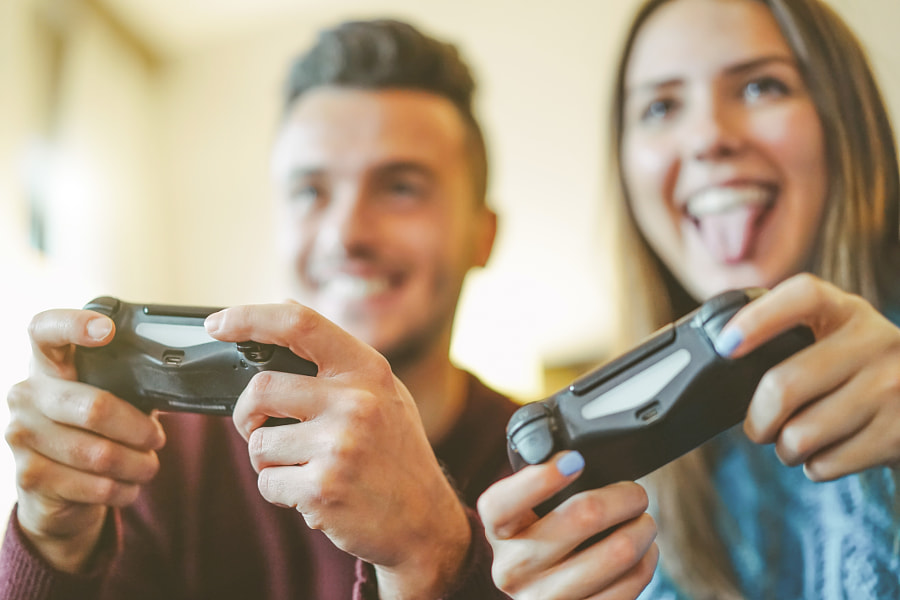 Inside the meteoric rise of gaming

This spring, amid global lockdowns, the video game industry boomed, with sales experiencing a 35% year-over-year increase in March. By April, Microsoft had reported that the number of their Game Pass subscribers had surpassed 10 million. As more people entered the gaming world, The New York Times published an introduction to the uninitiated, complete with tips for beginners and rundowns of the biggest platforms and games.

Meanwhile, in March, sales of the Nintendo Switch console more than doubled. That same month, Nintendo’s new game, Animal Crossing: New Horizons, sold more than 13 million copies within six weeks of release; by November, it had sold over 26 million, with experts saying that for many, the relaxing, desert island-themed game brought a sense of normalcy and connection during difficult times.

For those ready to chalk it all up to a passing fad, think again: an August study from Simon-Kucher & Partners found not only that people were spending more time and money on video games during the pandemic, but also that this trend was likely to continue post-pandemic. If this holiday shopping season is any indication, they were right; Microsoft’s Xbox Series X|S and Sony’s PlayStation 5 pretty much sold out. Read on for our tips for visualizing gaming in your commercial portfolio. A year ago, Getty Images named “Humanizing Tech” as one of their top trends, with almost two-thirds (62%) of brands in the financial services sector looking to depict technology and humanity within their visual branding. Heading into the new year, video games are one unique way to explore the relationship between technology and humankind. Commercial photographers can do this by focusing not only on the tech aspect of video games but also the sense of connection and togetherness they can foster.

During the pandemic, gaming has offered a safe way for us to communicate and socialize, with multiplayer games noticing an increase in interest. One study also found that 60% of gamers reported playing different games during COVID-19, preferring games with more social interaction. Battle Royale games, for instance, saw a 143% increase during shelter-in-place orders. 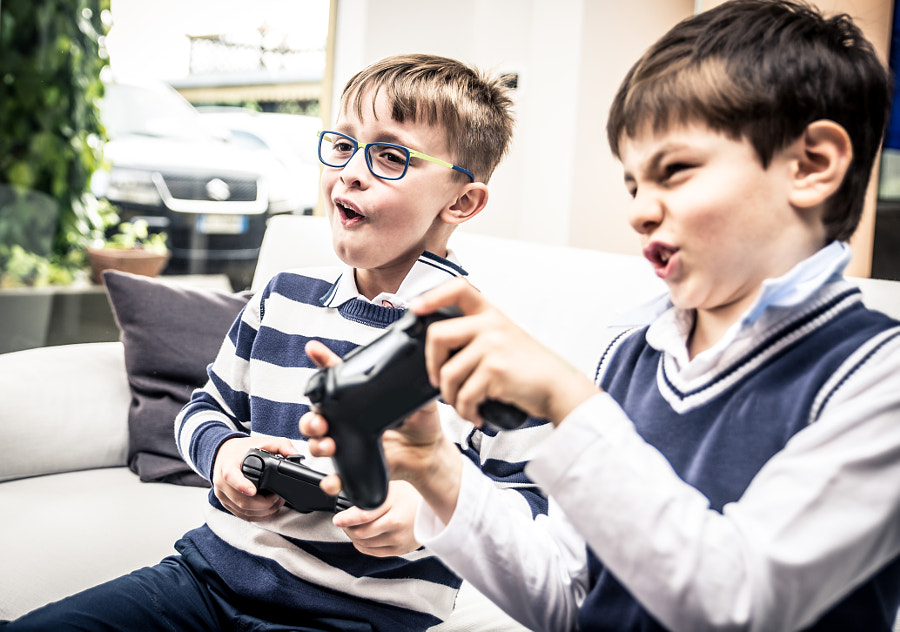 When incorporating gaming into your Licensing portfolio, the tech can be subtle and play a supporting role. This trend resonates commercially because it reflects real-life, everyday consumers, so remember to highlight candid, natural emotions, expressions, and interactions between players. It can help to work with models who know each other and share a rapport, including family members and friends.

Finally, get creative with props. Adding a headset can tap into the theme of connection, even if you only have one model. Keep your finger on the pulse of gaming trends, like AR and VR or mobile gaming for new and unexpected ways to visualize this movement; not all video game photos look the same, so think outside the box. Consult gaming blogs and your gamer friends for ideas; if they’re excited about something, chances are other people are too. 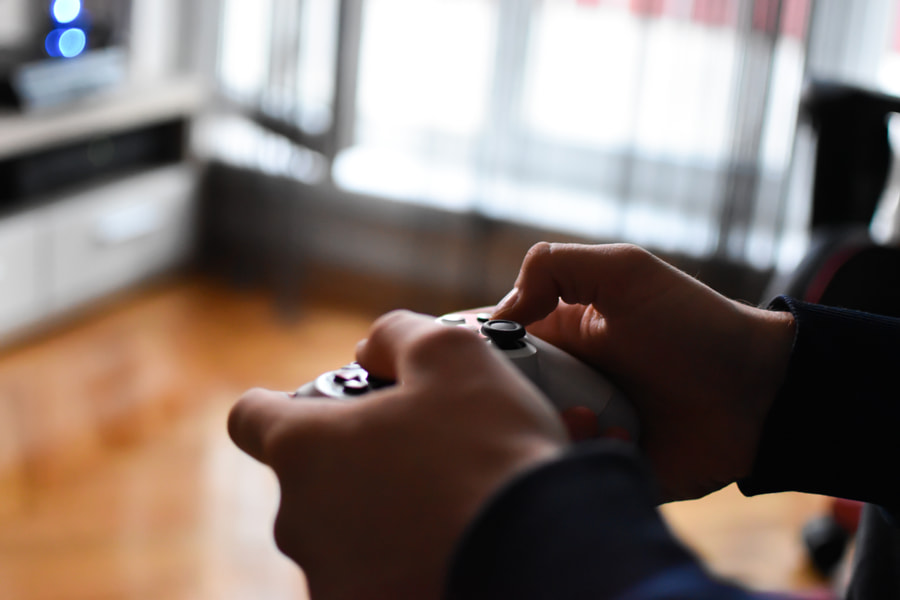 Unfortunately, even if you could get your hands on the much-coveted PS5 or Xbox Series X|S, you couldn’t include them in your Licensing portfolio. That’s because most consoles are instantly recognizable, and as with any tech device, you have to be careful to avoid any branded details. Even if you get rid of logos, certain design elements could still give away the brand, and that’s an intellectual property risk when it comes to commercial photography.

Fortunately, you can still shoot video game-related content without including identifiable consoles in your frame. Controllers tend to be more generic, especially third-party controllers. Choose controllers with solid colors and generic designs—you can easily hide key design elements like branding, labels, buttons, or ports with models’ fingers or edit them in post-processing. Keep in mind that certain controllers, like the Nintendo Switch Joy-Con, are so distinctive that they should be left out entirely. Choose devices that look more anonymous and less conspicuous. 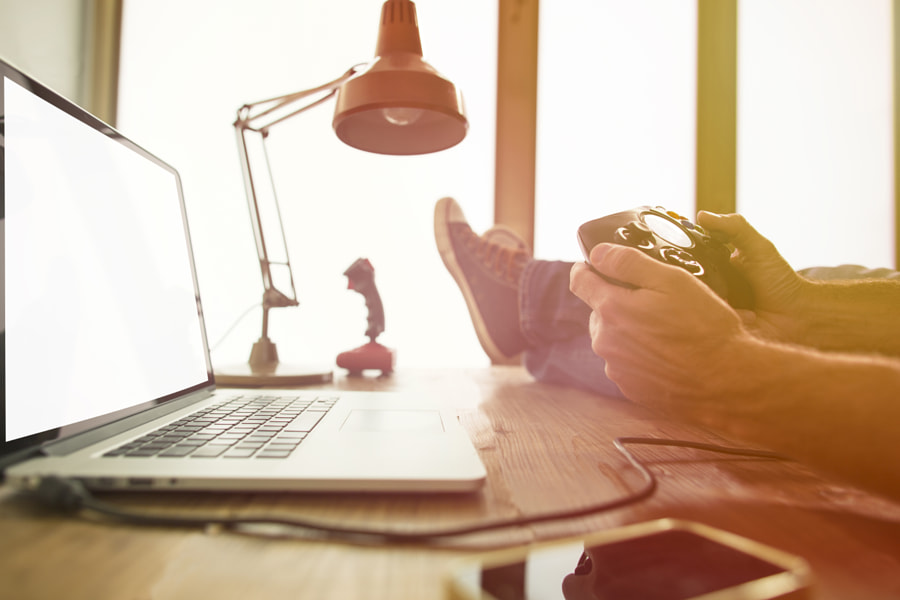 Of course, the games themselves are protected by copyright law, so watch your background for any cases, and remove them before shooting. Your screen will also need to be blank in the final image, as game characters and scenes are copyrighted. You can shoot away from the screen to focus on the players or keep the screen off while shooting in that direction. Buyers will often want to add their own images onto the screen, so it’s good to keep it blank so they have options. 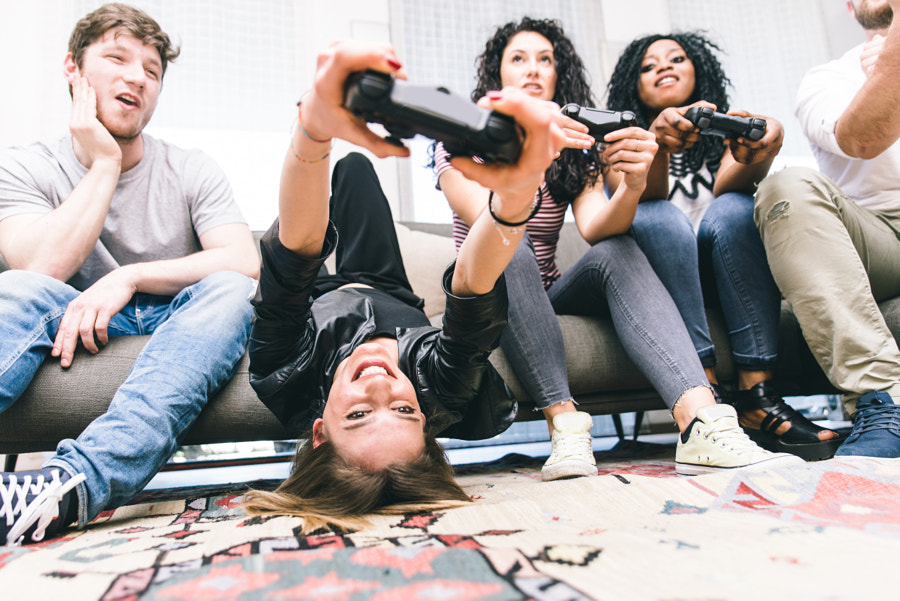 2020 has changed the way we understand gaming, and we’re seeing those changes reflected in the worlds of visual marketing and advertising. “Throughout the past year, video games have been looked at under a different light,” the 500px team tells us. “While typically thought of as a distraction, keeping people indoors in front of the TV, that distraction has become a much-needed escape—and a great way to stay engaged. For this reason, video games are now being praised for their benefits to mental health during a stressful period.”

This year, video game makers have also been promoting gaming as a means of fostering connections. In the spring, 18 companies joined forces as part of the campaign #PlayApartTogether, meant to encourage players to come together while maintaining a physical distance. The initiative received support from the World Health Organization (WHO). Plus, this fall, a recent study from researchers at Oxford University has suggested that time spent playing video games can be good for mental health.

As interest in gaming grows, the visual culture surrounding video games will continue to shift, making this topic fertile ground for commercial photographers. When shooting video game content for your Licensing portfolio, remember to tap into larger themes with your keywords; terms like “coming together”, “friendship”, and “optimistic tech” could lend your photos more layers of meaning and context, helping them stand out to buyers.