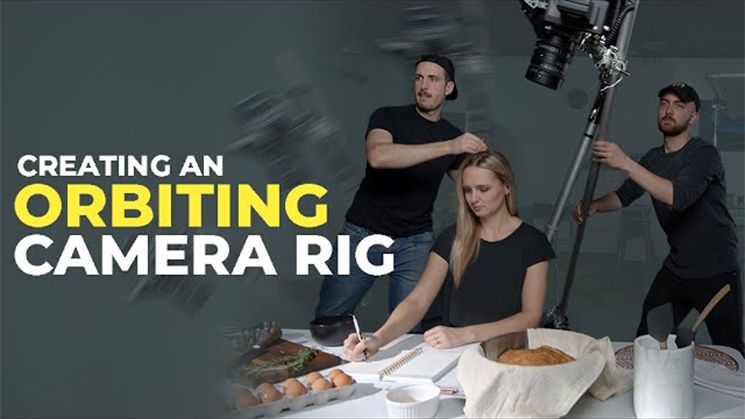 Sometimes, you just need a spinning camera that orbits around your subject for a video. There are many really fancy, expensive, customised and automated rigs out there that will let you do this costing a whole lot of money. But sometimes, you just want to go the DIY route with grip gear that you possibly already own.

The folks at Threefold needed a way to shoot a cool shot idea to film a promo for a planner called Evertide. So they built an orbiting rig just out of a bunch of grip gear they already had laying around. The twist, in this case, though, is that instead of spinning around a subject horizontally like we may be used to, it rotates on the vertical plane, going up and over the subject.

As explained in the video, the rig was made from a couple of c-stands, steel tubes, corner brackets, clamps and other grip gear allowing them to safely rotate a camera over the head of a seated subject. It lets them start the camera at one side of the shot, rotate it over the subject and end on the other side while keeping their main subject in the centre of the frame the whole time.

They do mention in the video that it’s possibly not the ideal rig for all situations, nor the most advanced. All of the camera moves are made completely manually and it requires two people to operate it – one to lift it up and one to lower it down on the other side. So, creating consistent shots means a lot of communication, seamless handoff, practice and possibly shooting the same shot over and over again many times until it looks right and matches the others.

But considering they only needed four shots for the sequence, they didn’t need to buy any more gear in order to make it, and it allowed them to get what they needed quickly and easily, I’d say it was pretty perfect. The final result is definitely effective and very cool. It reminds me of a higher-end version of Insta360’s “Time Flip” effect.