On August 4, an explostion rocked the city of Beirut, killing over 200 and injuring more than 6,500. In order to reconstruct exactly what happened, forensics researchers were able to piece together the event using photos and videos uploaded to social media.

Forensic Architecture was invited by the Egyptian online journal Mada Masr to review the available open-source information that included photos, videos, and documents to help provide an accurate 3D timeline and model of the event. That model, which includes the warehouse, clouds of smoke, initial blast sphere, and parts of the city where the reference images and videos captured, has been made available on GitHub.

Starting with the very first image uploaded to social media on August 4, 2020 at 5:54 PM, the researchers began their timeline.

“Smoke plumes are continuously transforming and have a unique shape at every moment,” the forensic researchers said. “We modeled the plume at this crucial stage to help synchronize other videos without a time stamp.”

Once the forensics team had this information, they were able to search for videos uploaded at similar times and analyze how the smoke plume evolved. They analyzed the color of the smoke as it darkened over a period of 10 minutes, which indicated that the materials that were burning had changed.

By 6:07 PM, the researchers were able to determine that a second fire had started that created an additional plume. Seconds later, the explosion obscures the entire area of the warehouses. However, because of the clean, 180-degree shape of the explosive blast, they determined that this particular explosion had a single detonation point, and were able to map that point by centering over the middle of that explosion. 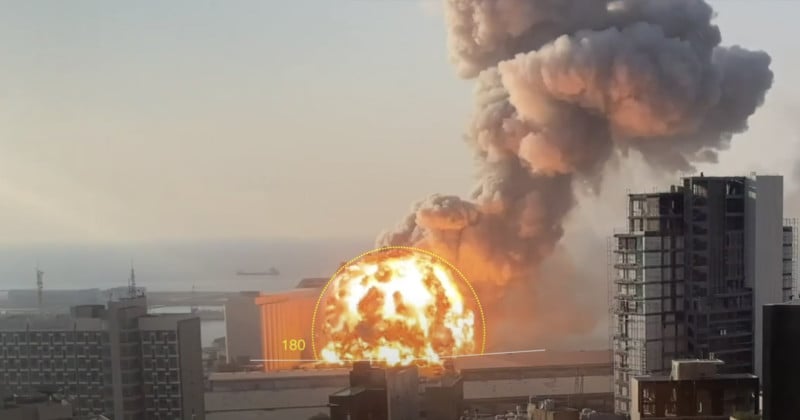 They then used the two plumes, the original smoke plume and the explosion plume, to synchronize the remaining footage.

Images and video taken from a variety of locations from a variety of angles allowed the researchers to accurately reconstruct the event once they were properly inserted into the timeline. It’s a wealth of information that prior to the preponderance of social media would not have been available, and experts would likely have spent a lot longer trying to piece together the incident with far less information, likely resulting in a much less accurate framework of the event.

The researchers also were able to pull together images from a combination of sources along with earlier reports of poorly stored, flammable ammonium nitrate and other explosive materials such as tires and fireworks that were housed in the warehouse. Using these images, the team was able to accurately map the interior of the warehouse and isolate why they believe the explosion happened.

While it’s easy to blame social media for much of society’s woes, this research goes to show that crowd-sourced public information can be extremely valuable. Just one photo uploaded to Twitter provided a monumentally helpful piece of information that allowed forensics experts to build a timeline and model of the event. This information was critical to understanding why the explosion happened and will hopefully be used to prevent such a tragedy from occurring again.