Late last year, the World Wildlife Fund’s Living Planet Report revealed that populations of mammals, birds, amphibians, reptiles, and fish have seen an average drop of 68% over the last fifty years. Today, one million species face the threat of extinction. Between habitat destruction and the wildlife trade, human activity has led to a crisis for the natural world, while also driving the emergence of new zoonotic diseases, most recently COVID-19.

Amid these catastrophic losses, hope remains, and new evidence suggests that we can end and potentially reverse deforestation by supporting critical conservation actions and changing the way we produce our food. Each of us can start to make a difference by reducing waste, choosing foods with a lower environmental footprint, and remembering what’s at stake if we don’t shift our perspectives.

In honor of Earth Day, we curated this collection of unforgettable photographs from the 500px community, highlighting the beauty, fragility, and strength of the natural world. From the far reaches of Norway to the wildlife sanctuaries of South Africa, these pictures serve as a timeless yet urgent reminder of the importance of conservation, whether we’re traveling through the remote wilderness or exploring our own local parks. 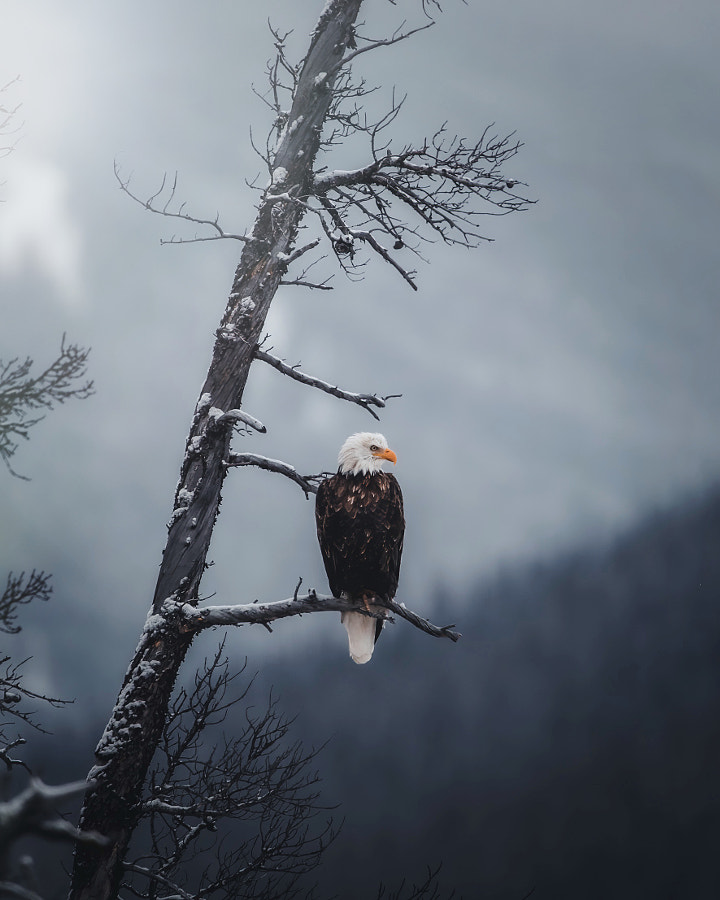 “This shot was one of those scenes where, everywhere you looked, literally nothing was moving,” the photographer Seth Macey remembers of this moment in Canada’s Jasper National Park. “Complete stillness in the scene. It took this Bald Eagle moving its head just ever so slightly to break the pattern and give itself away. It’s so interesting, especially in wildlife photography, how important scanning for the tiniest bits of movement can be—a skill and a muscle that is definitely exercisable with repetition.” 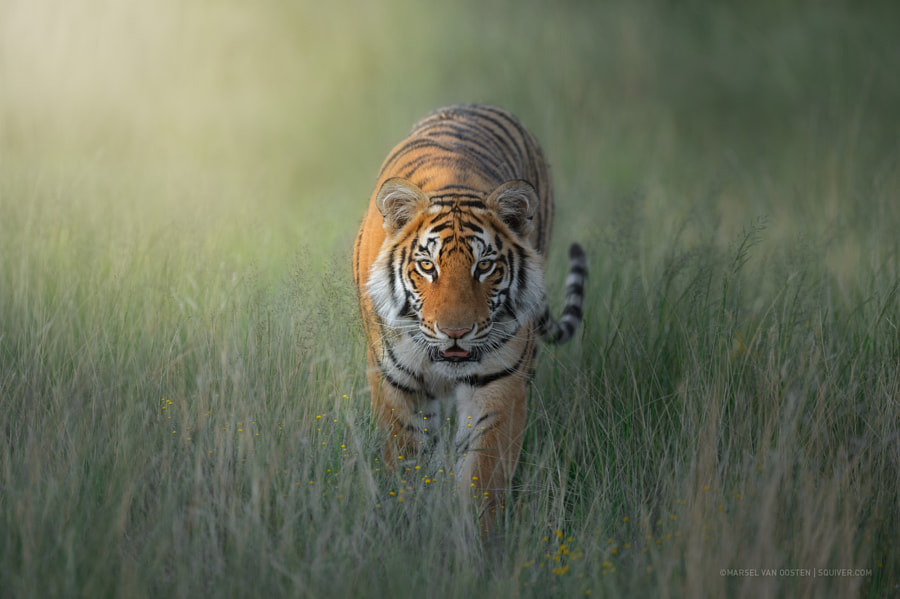 “Since the early 20th century, tiger populations have lost at least 93% of their historic range,” the award-winning photographer Marsel van Oosten says. “The tiger is listed as endangered on the IUCN Red List, as only some 3,000 tigers remain in the wild. More tigers currently live in captivity in Texas than in the wild.”

The most significant threats facing tigers include habitat loss, fragmentation, and poaching. In addition to having their habitats destroyed to make way for agricultural developments like palm oil plantations, tigers are killed as part of the illegal wildlife trade. To help protect these animals for future generations, Marsel recommends donating to panthera.org. Among other initiatives, Panthera works to protect tiger habitats and prevent poaching. They lead or support tiger conservation efforts across India, Indonesia, Bhutan, Malaysia, Thailand, and Nepal. 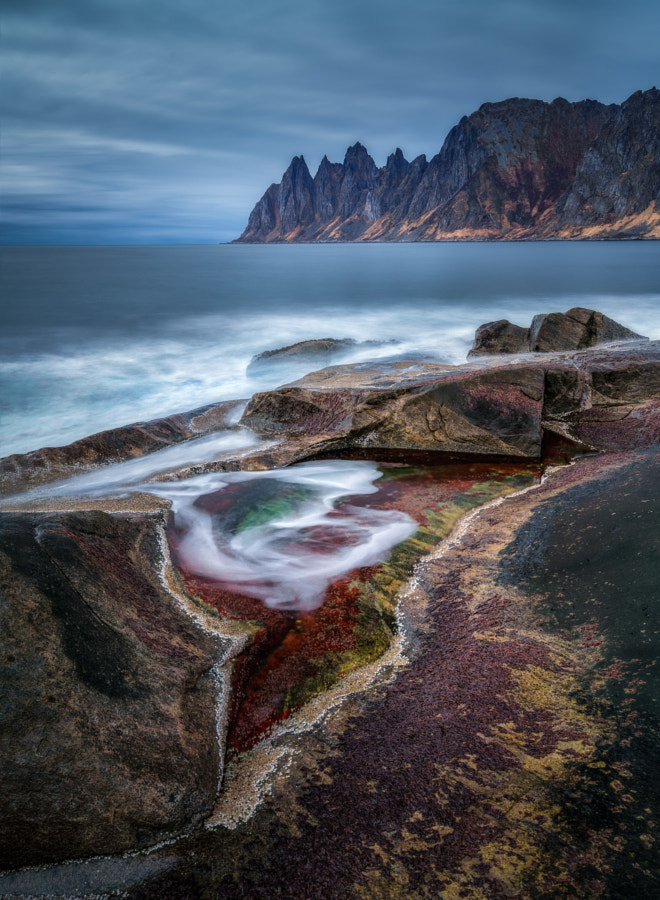 “At the coast of Senja in Northern Norway, algae and moss growing in the constant sea spray paint amazing colors on the (extremely slippery!) rocks,” the landscape photographer Hans-Peter Deutsch says, while facing the iconic and jagged “Dragons’ Teeth” rocks, visible along the horizon. 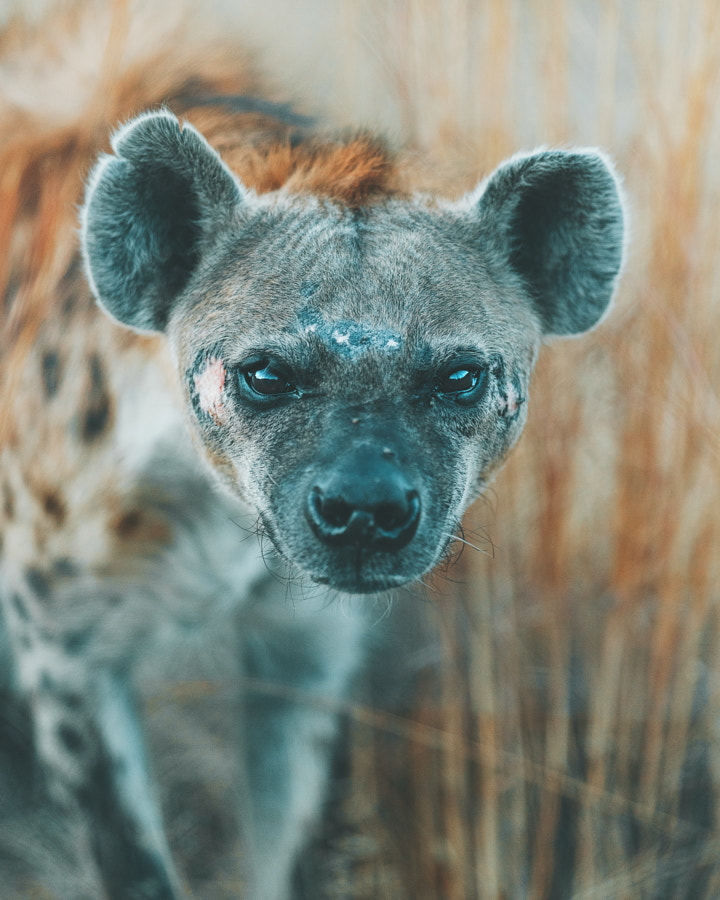 “One of the highlights for me during our time in South Africa was being lucky enough to meet Phiri, the lone dog of LIONSROCK Big Cat Sanctuary & Lodge,” the Alaska-based photographer Charly Savely remembers. “He was rescued by Four Paws International from a zoo where his health was deteriorating. He’s got the scars to prove it. Now, he is very playful and always smiling.” In June of 2020, Phiri, a spotted hyena, celebrated his tenth anniversary at the sanctuary. 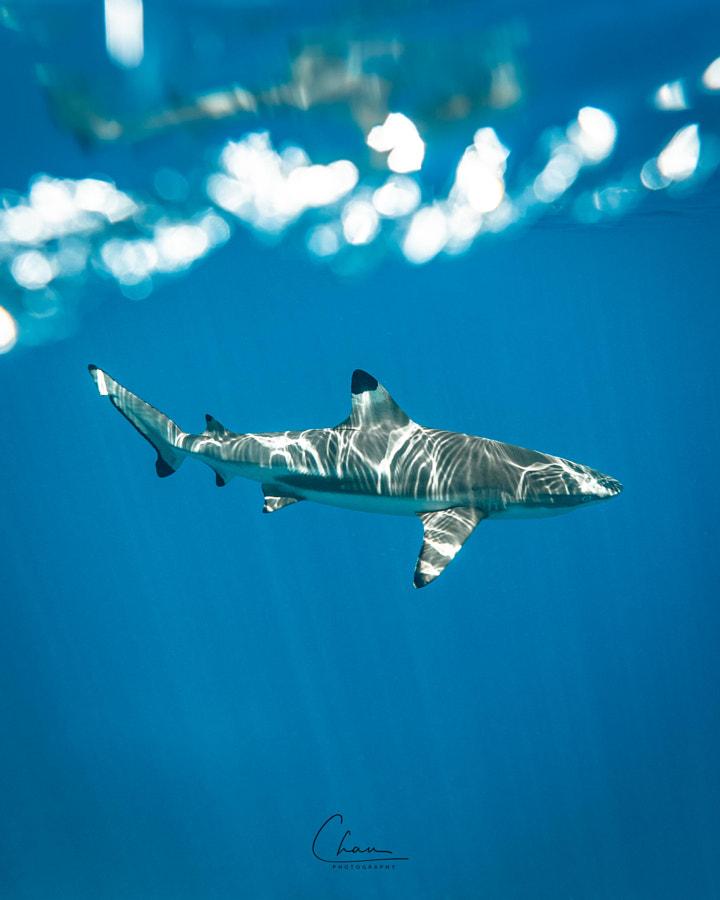 “I used to fear them,” the nature photographer Chun Chau says of sharks. “Now I fear for them. I have been in the water with these so-called killers many, many times. I have nothing but respect and admiration for these animals. Without them, the ocean ecosystem will lose its balance.” Today, Chun speaks out on behalf of sharks and against the shark fin trade, a brutal industry. 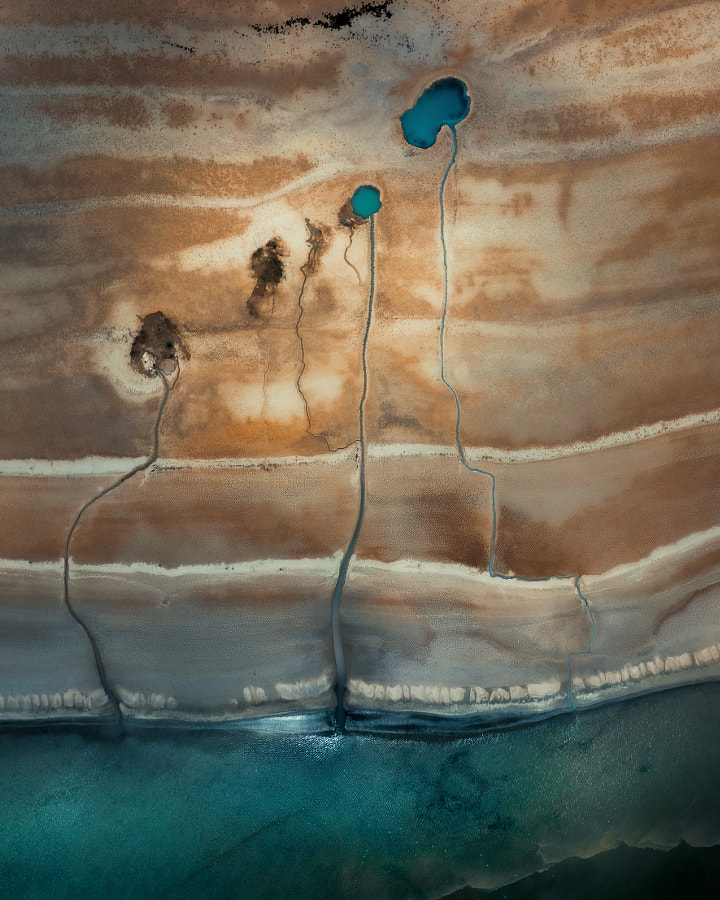 Here, Bahadir Sansarci photographs Turkey’s Burdur Lake, a critical wetland for birds like the threatened white-headed duck. The precious lake itself is at risk; in 50 years, the water level has decreased by 17 meters, with the water volume falling 40%. “I don’t know for how long we’ll be able to enjoy and photograph this view,” Bahadir laments [translated by us from the original Turkish]. “But I want to take action and encourage others to do the same. Water is our most valuable element.” 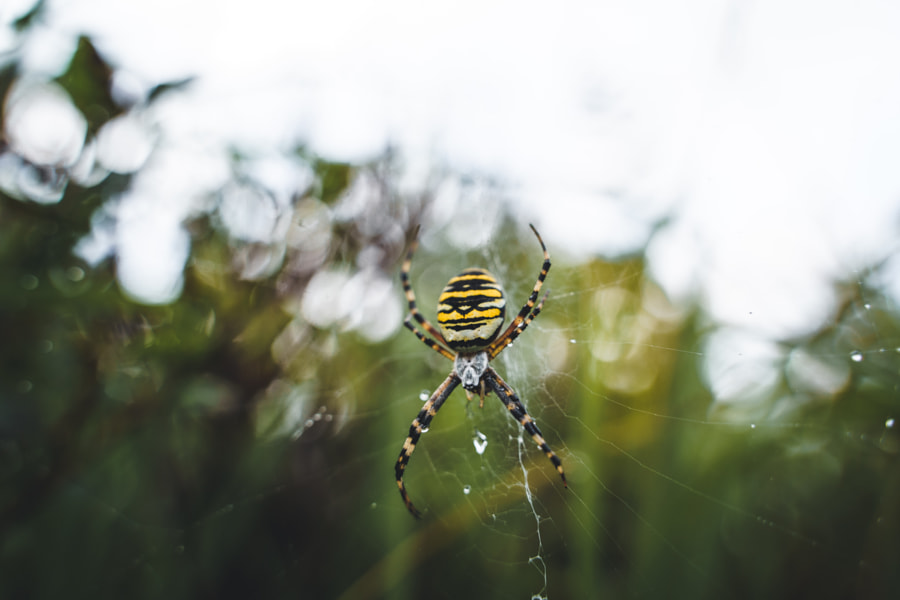 Anskar Lenzen, a wildlife manager and photographer from Germany, came across his first wasp spider last year in Black Forest National Park. “I couldn’t believe how beautiful they are in nature,” he admits. The spider gets its name from this yellow, black, and white stripe, which appears on the female of the species and protects it from predators.

“Wasp spiders belong to the family of orb-weaver spiders and create fascinating spiral, wheel-shaped webs,” Anskar explains. “It takes them around 40 to 60 minutes to build their web, which is then used to catch all sorts of insects, preferably grasshoppers. After being caught, the prey will quickly be wrapped in silk and then paralyzed and killed by the spider’s venom. For us humans, the venom is not dangerous, as the spider cannot penetrate our skin.” 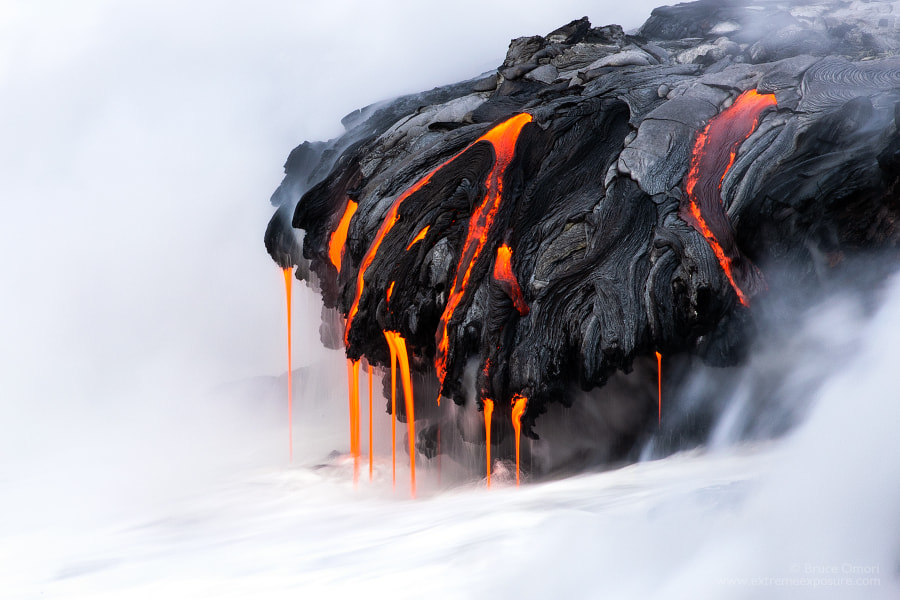 Bruce Omori was born and raised on Hawaii’s Big Island, where he developed an early passion for the natural world. Today, he can be found exploring Kilauea Volcano in search of otherworldly compositions and fiery textures. “This shot was taken four years ago, during the 61g phase of Kil?uea’s 35-year eruption,” he says. The photographer Daniel Kordan remembers witnessing the fireflies of Japan as one of the most enchanting experiences of his career. “Hotaru season lasts from May to around July in different regions of Japan,” he says. “I chose Kyushu island with its beautiful nature as my destination. I came to each location early, long before 8:00 to 9:00 pm, when the first fireflies show up. First, just a few fireflies started to blink, slowly lifting up from the [leaves]. I felt like a kid looking at a Christmas tree for the first time.” 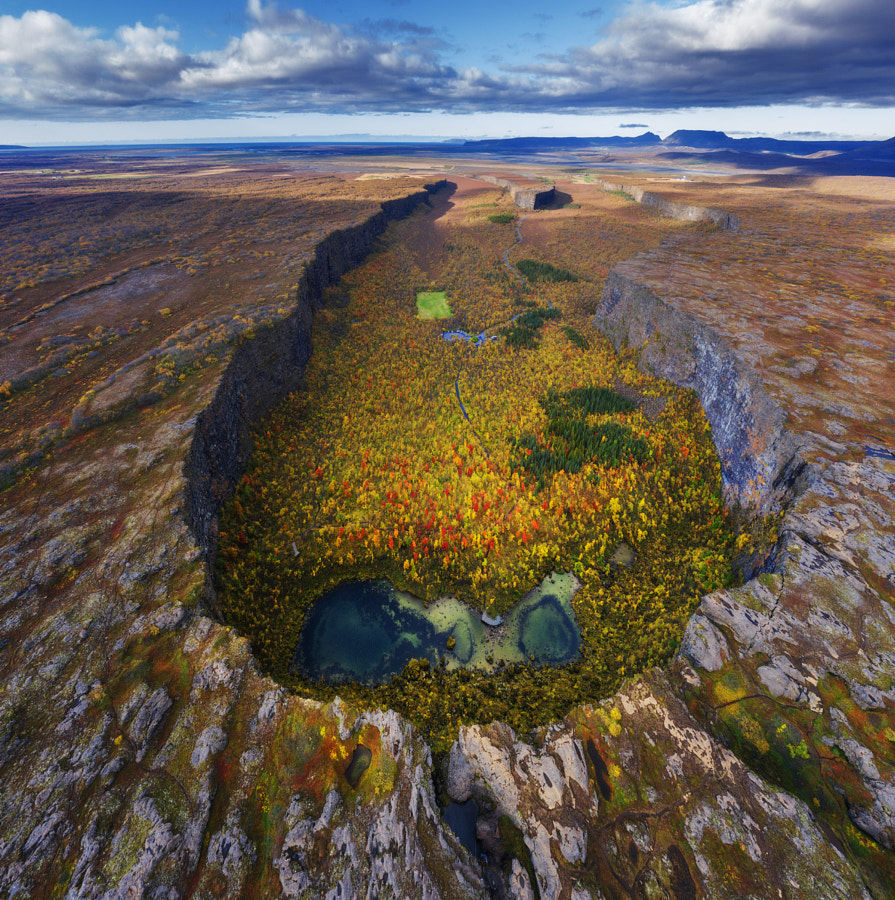 “The glacial canyon Ásbyrgi is a giant horseshoe-shaped depression in the north of Iceland,” the photographer Iurie Belegurschi explains. The place is rich with mythos—according to early mythology, it was created with the hoof of Odin’s horse, Sleipnir. Later, it became known as the home of Iceland’s Huldufólk, or hidden people. “On my long transit home from Namibia, I couldn’t help but overhear the conversation from a man sitting next to me at the airport—words that brought me to tears,” the photographer Emilie Ristevski shared in 2019. “I’ve heard stories about these issues before but never have actually been in the presence of someone who has been involved directly and taken part in trophy hunting.

“I sat and heard an American man’s voice, which continued for over an hour, describing in detail the ways in which he killed and shot a number of innocent African animals. The type of guns he used, the distance he was from each animal, and the disgusting amount of money involved in this industry. My heart broke, and tears ran down my eyes.”

Emilie is passionate about protecting wild animals from human interference, and this image is one of many from her time in Namibia. “If there’s anything we can change immediately it’s how we understand, respect, and communicate with wildlife,” she says. “If you are lucky enough to ever be in the presence of these wild animals or any wildlife around the world, please be responsible. We all have a role to play, and I hope one day all life on earth can live in harmony with nature.” 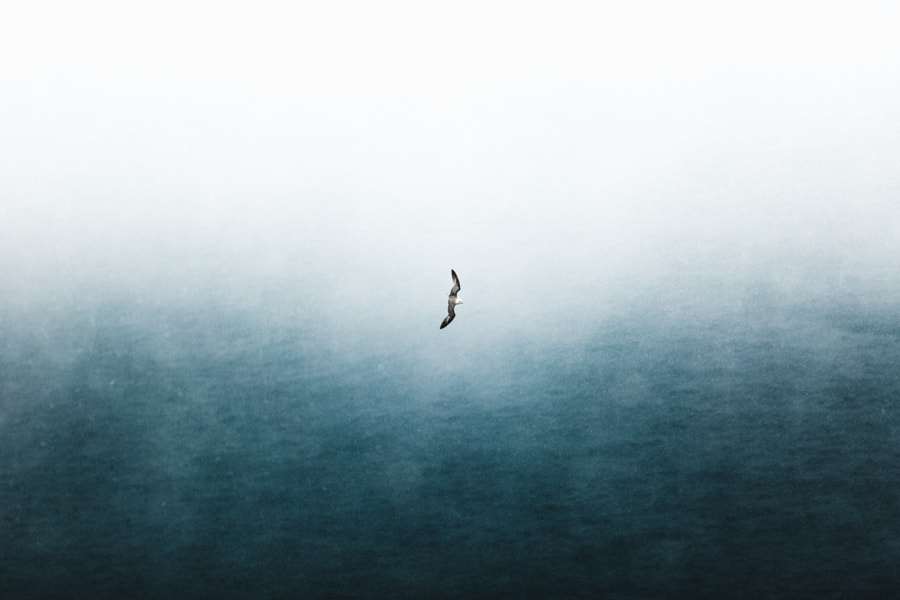 Benjamin Hardman came across this northern fulmar, a seabird searching for a place to land, while traveling through the Faroe Islands amid a snow storm. “These birds can be found in abundance along the coastline here in the Sub-Arctic, usually seen gliding around in the wind and sitting with their lifelong partners out on the cliffs,” he explains. 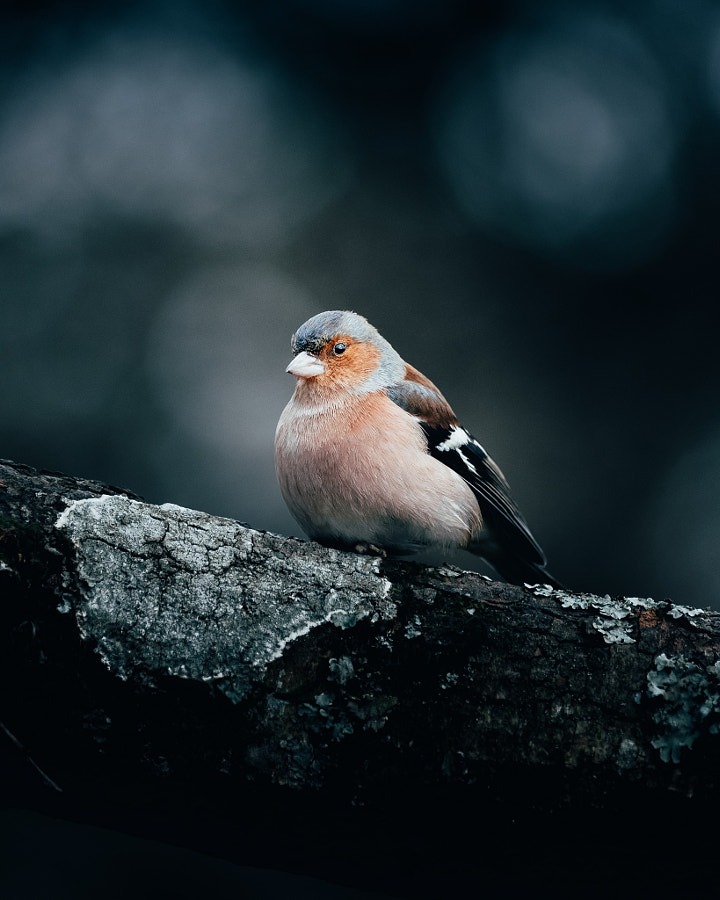 The English-based outdoor photographer Paul Boomsma has encountered many remarkable birds in Stover Country Park, a local nature reserve consisting of more than 114 acres of woodland, grassland, heathland, marsh, and lake. This one is a chaffinch, part of the finch family; though they often blend into the landscape, you can spot them more easily once they take flight, revealing the bright whites of their wings and tail feathers. 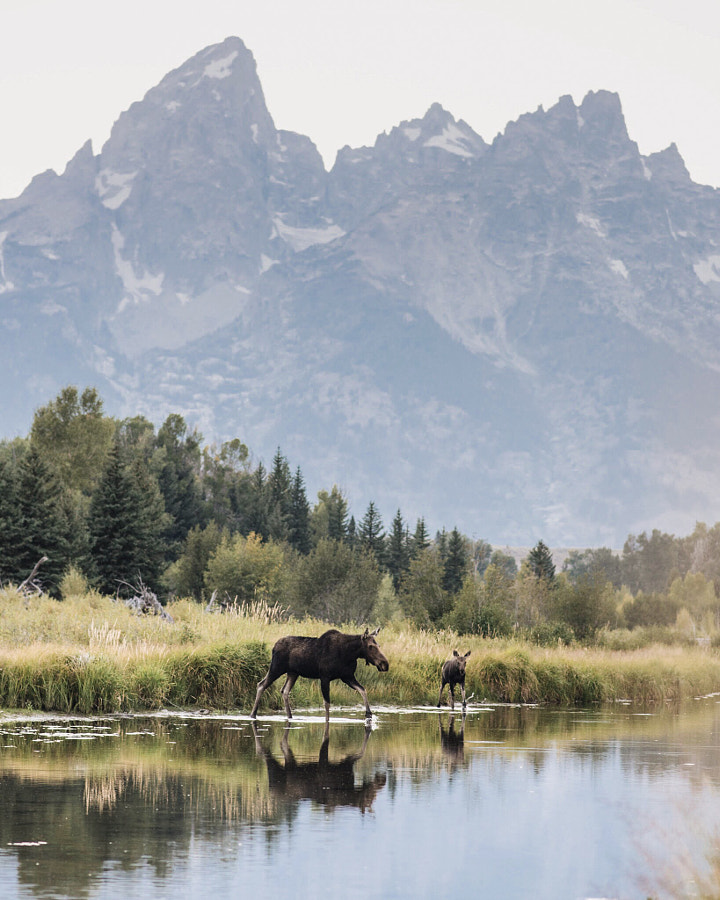 One evening in Grand Teton National Park, Tanner Wendell Stewart spotted these moose, a mother, and her calf, fording a river. Part of the deer family, moose can often be found around the edges of lakes and streams, alone or in family groups. “It was truly a special moment,” Tanner says. 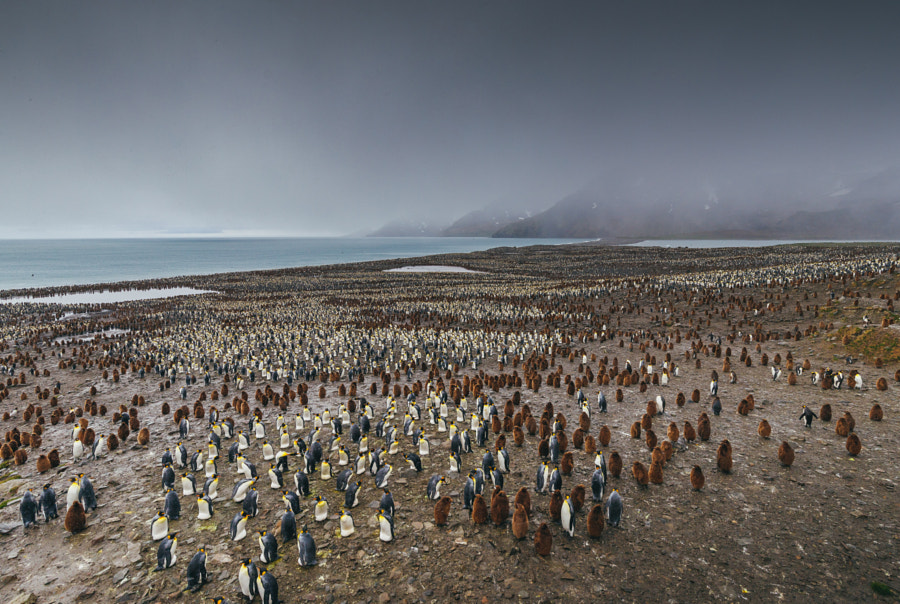 Here, the photographer David Merron, who specializes in the polar regions, surveys the King penguin colony at St. Andrews Bay in South Georgia. “The white penguins grouped together are nesting adults, which are at this point (in late December) mostly sitting on their precious single egg,” he explains. “The brown patches are groups (or créches) of almost year-old chicks that will soon molt into their adult feathers and head off for life at sea. Though not all in the frame, there are thought to be over 150,000 pairs of nesting King penguins at St. Andrews.” 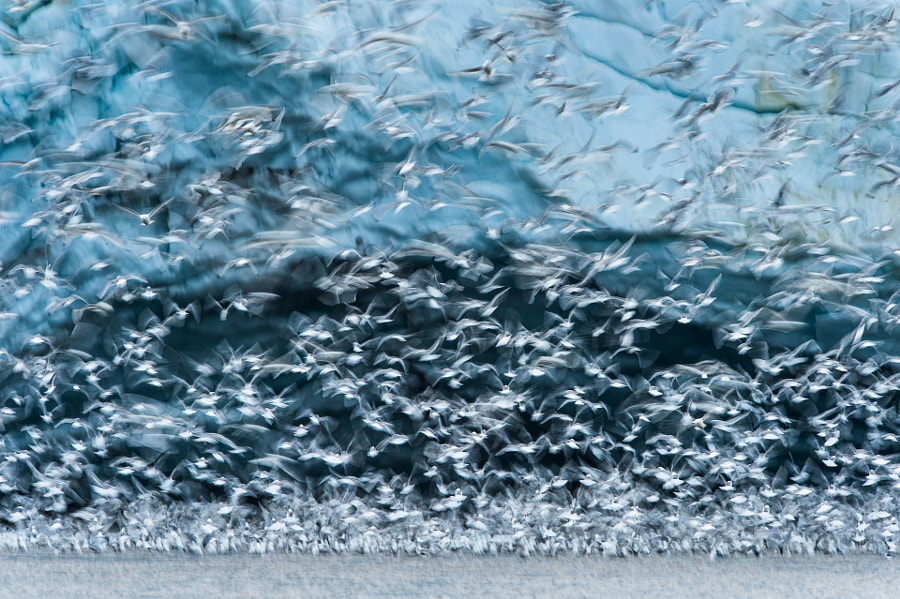 “As the glaciers are melting in late summer, huge flocks of kittiwakes gather in front of them to feed,” the photographer Roy Mangersnes says, remembering his time in Svalbard. “The runoff creates turbulence, bringing plankton to the surface so that the birds can get to it. Every time the glacier cracks or calves, all the birds take off in a beautiful chaos of white wings against a blue glacier wall.”