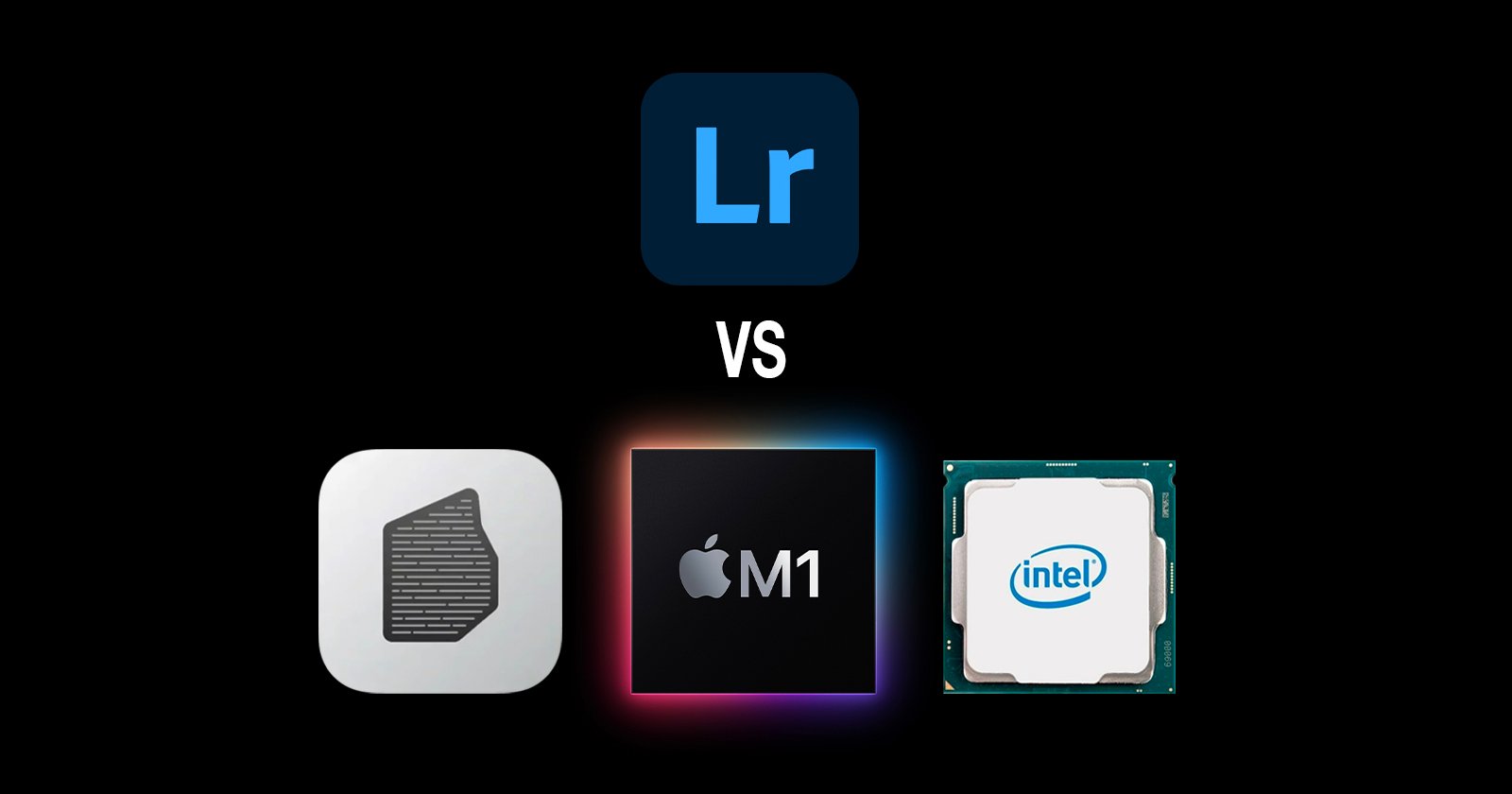 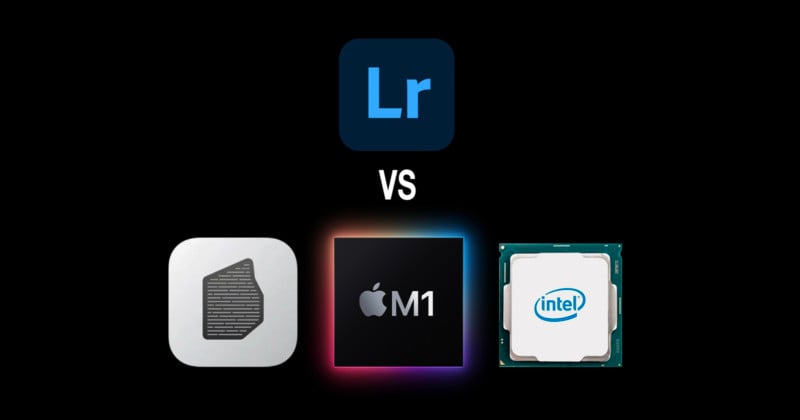 Today Adobe publicly announced native support for Apple Silicon, which means you won’t have to emulate with Rosetta 2 to edit photos if you have a new M1-equipped Mac. But is there a noticeable improvement over emulation, or even over Intel-based machines? After testing, we have some answers.

The below test was run by DL Cade, former Editor of PetaPixel and current product testing specialist. I asked DL to take a new Apple MacBook Pro equipped with M1 as well as an Intel-based MacBook Pro and run Lightroom through a testing regimen that has become our “standard” at PetaPixel that tests performance on imports and exports from a Sony a7R IV and a PhaseOne 100-megapixel medium format.

Every benchmark is the average of three or more consecutive runs to adjust for any inconsistencies.

Below is this data visually charted, with the ARM Mac at the top in red, the emulated version in orange, and the Intel version in yellow: 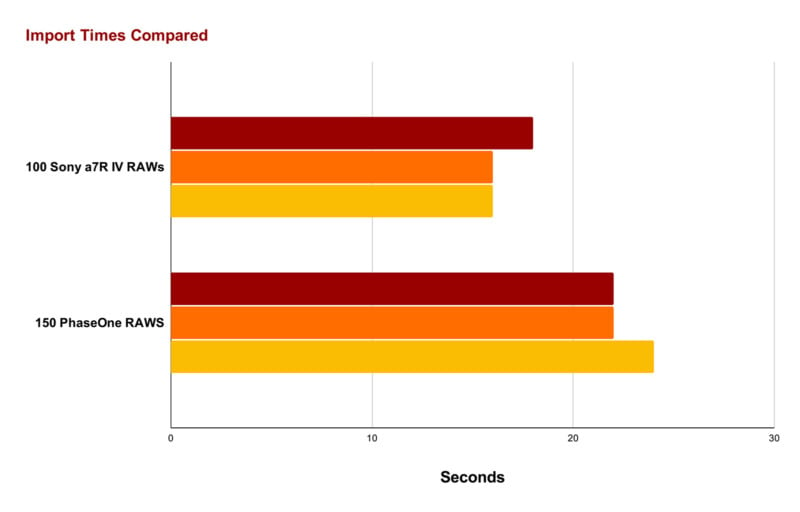 The next step involves timing how long each of the versions can export those same files in two different formats: 100% resolution JPEG in sRGB and 16-bit TIFF in AdobeRGB. 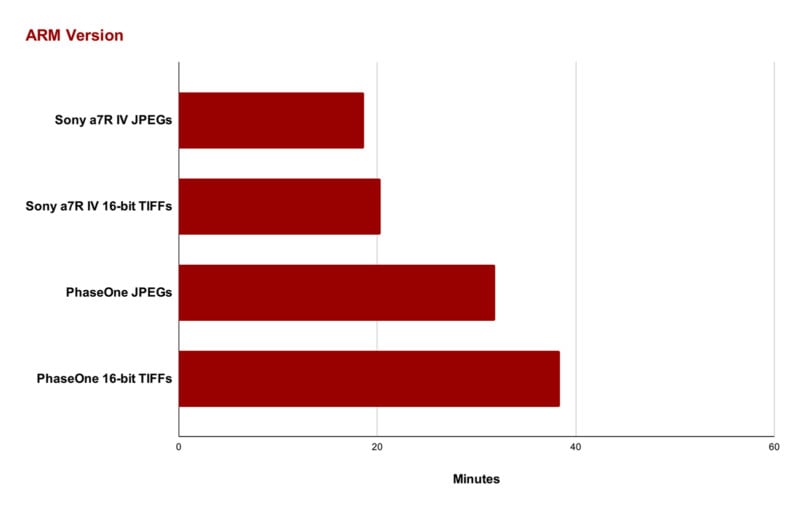 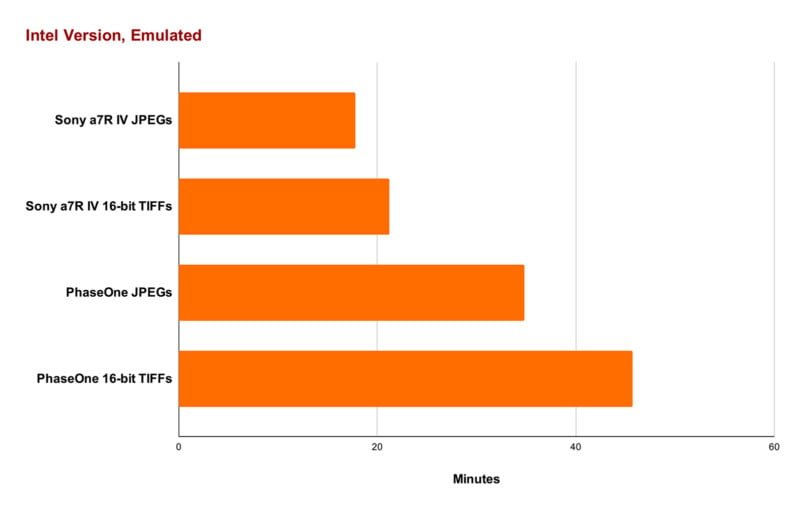 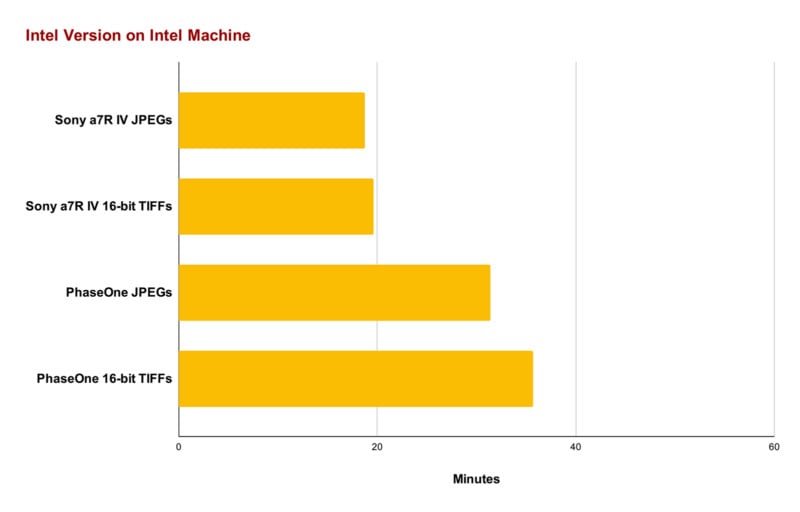 Below are all three results compared against one another with the ARM Mac at the top in red, the emulated version in orange, and the Intel version in yellow: 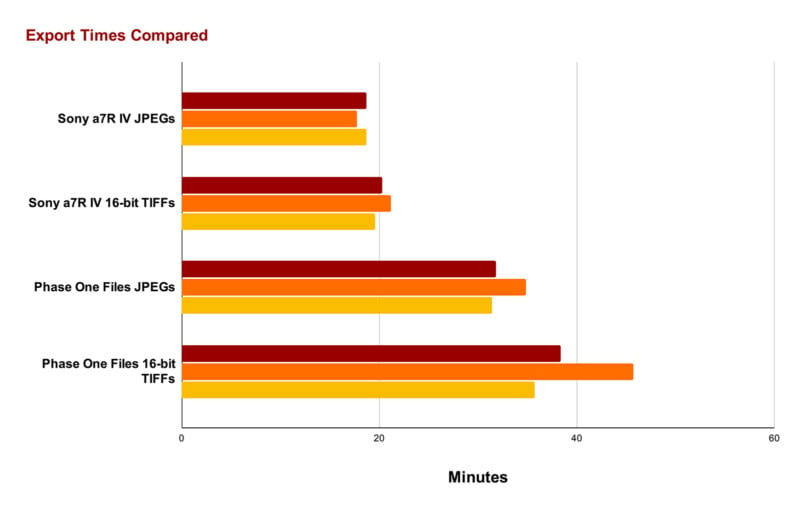 Comparing the ARM-optimized version to the Intel version running via emulation, we didn’t see any big performance improvements in our standard import/export benchmarks. Yes, native M1 Lightroom is faster, but it’s not by a hugely appreciable amount in most cases. There does seem to be a slight speed bump with some longer export tasks, but the most noticeable improvements are in the overall usability of the app: it runs smoother and is even lighter on the CPU, so the fans simply never have to turn on.

Comparing it to the Intel version running on an Intel Mac, it’s just so abundantly clear that the M1 chip is superior. Not only were the export and import times relatively comparable despite the Intel model having twice the RAM as the M1 model, the Intel MacBook Pro had its fans on full blast during every export run. Even a 20-second import could get the fans going. Meanwhile, the M1 MacBook Pro was whisper quiet the entire time.

So while there are some speed improvements on the M1 Macbook Pro when compared to emulation, most will find the biggest benefits in how efficiently the Macbook Pro with M1 runs Lightroom. The real speed tests for what Apple can do with its own silicon will come when they can devote the chip fully to power. Hopefully, we will see that in the next generation of iMacs.