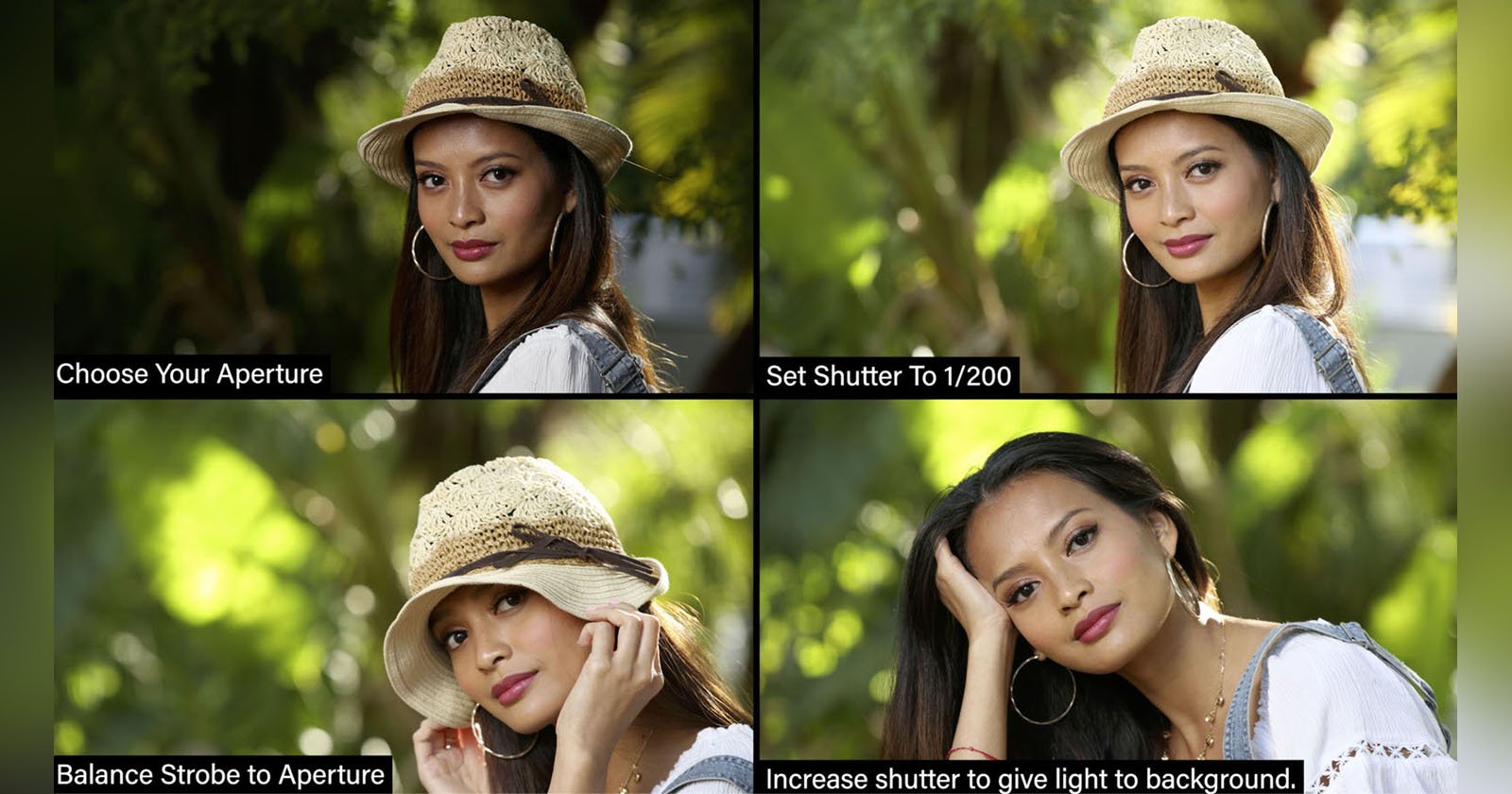 So the way I generally do this is: 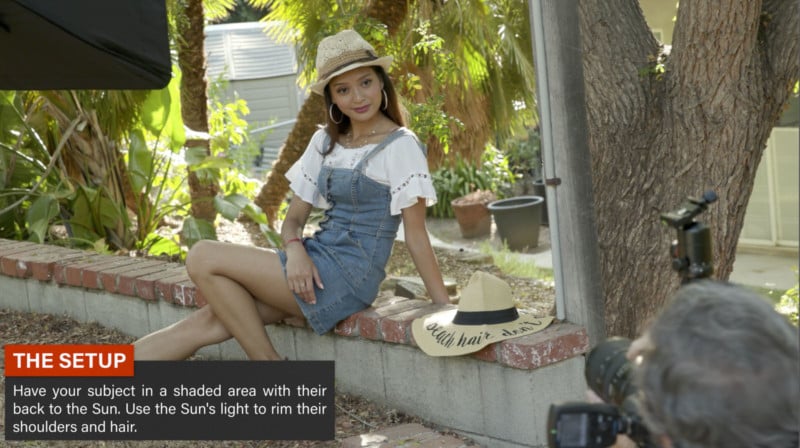 First off, I set her up so that she has the sun coming from behind. I always like the sun from behind because it gives her a nice rim light on her hat and on her shoulders. But I’m going to keep her in the shade pretty much.

It’s just that little bit of rim light coming through is giving us a few highlights on her hair, on her back, and on her hat. If I’m out in direct sun, I’ll throw up a translucent to make it look like she’s in the shade or just a plain reflector to get her out of the sun. 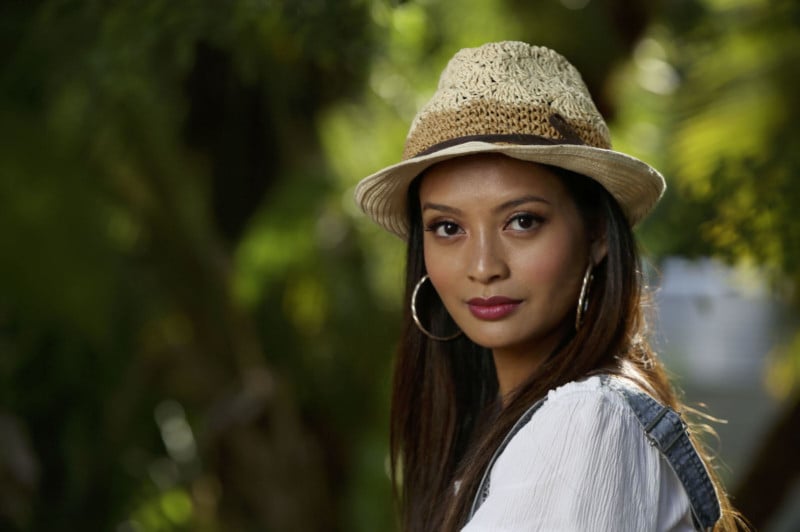 Right now I want a shallow depth of field. So I’m going to go to f/5. I can make it shallower than that. But for me, I want enough depth field to keep her face and her head sharp. And I let the background fall out of focus, and 5 does that really nicely on a 150mm lens (I used the Tamron SP 70-200mm f/2.8 Lens). So that’s the number one point, choose your aperture for creative reasons.

Now principle number three. I’m going to match the power of my strobes to my aperture. (I am using the Westcott FJ400 Strobe and Westcott 2’x3′ Softbox.) I’m going to dial the power up or down until I get the perfect amount of light on her face. I just want the strobes to match the aperture. I don’t care about the ambient light. I don’t care how dark the image looks. I just want the strobes to look right on her face.

So at f/5, I’m going to take an image here at 1/200th of a second and just see what we got. Here the strobes are perfect. I’ve dialed them up and down, and I’ve made my adjustments on my strobe. I have that strobe in a nice position up front here, the lighter face, I’ve tilted it up slightly. So I’ve got a vignette off from her shirt, but it’s too dark in the background.

Step 4: Increase Shutter Speed to Give Light to the Background

So number four, I now start increasing my shutter until I like what I see in the background. So I’m going to go from 1/200th to 1/100th sec. Now the background is becoming brighter. I like what I’m seeing. I’m going to go to 1/50s and now I’m getting some life into that background. I could even go I think to 1/30s. Yeah, I’ve got a beautiful background that she feels like she’s integrated with. The strobes don’t feel like they’re lighting it. It looks like it’s just the ambient glowing light in the scene and it looks fabulous.

So there’s a simple formula:

1. Choose your aperture for creative reasons. 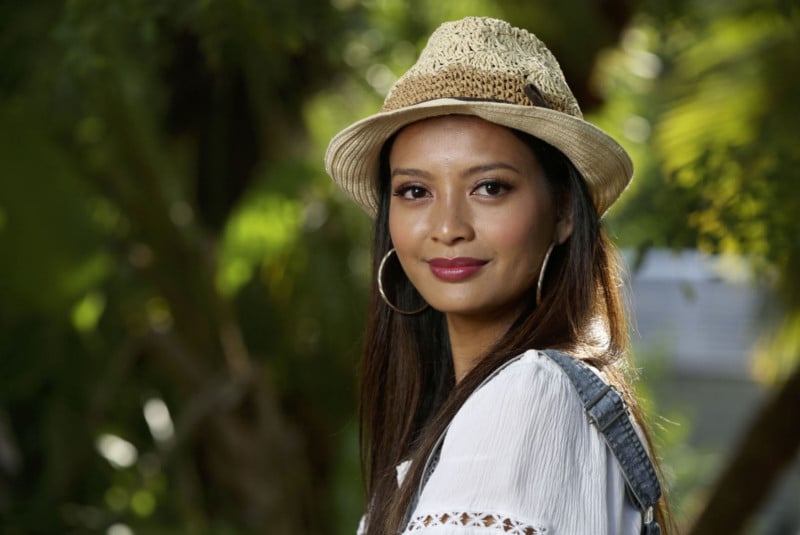 3. Balance your strobe power, dial it up and down until it matches the aperture. 4. Then start opening up that shutter until you like the background the way it looks. And that integrates those two together and then shoot away. I’m going to shoot some. 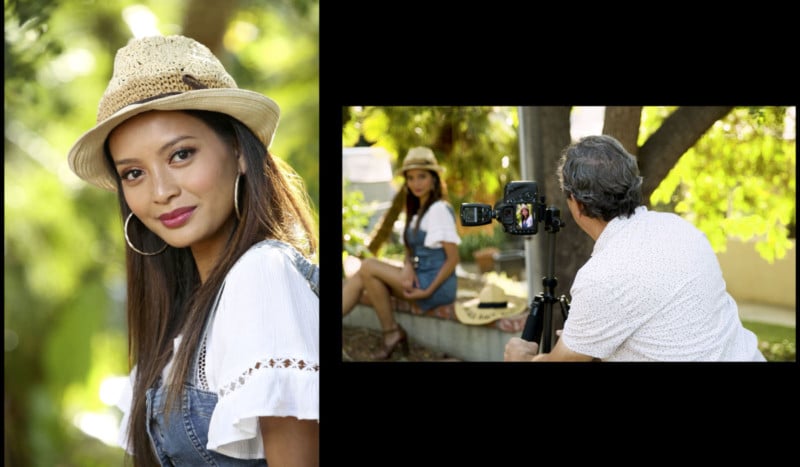 Now if I start getting a hot spot in there, and I can see one right now. You can see just over her shoulders is a really bright spot back there. I’m just going to move my camera a little bit, it doesn’t have to be very much. And I’m going to get rid of that hotspot. 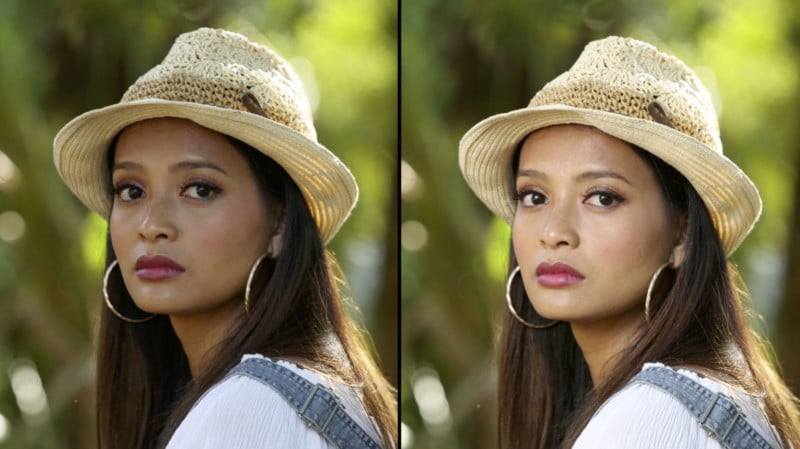 So here are two images without and with the strobe. You can see the difference. Just adding a little bit of strobe opens up the image and makes it look wonderful. I got there by first getting rid of as much of the ambient as I possibly could. Then I set my strobe to my aperture, then I added the ambient until I like the look and shot away. 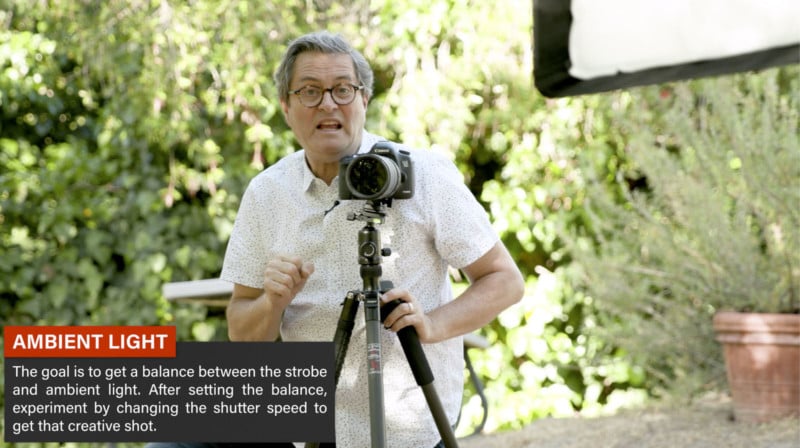 Then you add the ambient back in and you’ll find the perfect marriage of those two, strobe and ambient. Sometimes you may have a lot of ambient light on her face. Other times might not be much at all. But I’m also looking at the background trying to get that background balanced with her face as well. So I’m looking at those two things as I make my shutter longer and longer, adding more and more ambient until I like what I get. (I used the FotoproUSA X-Go Max Tripod on this shoot.) 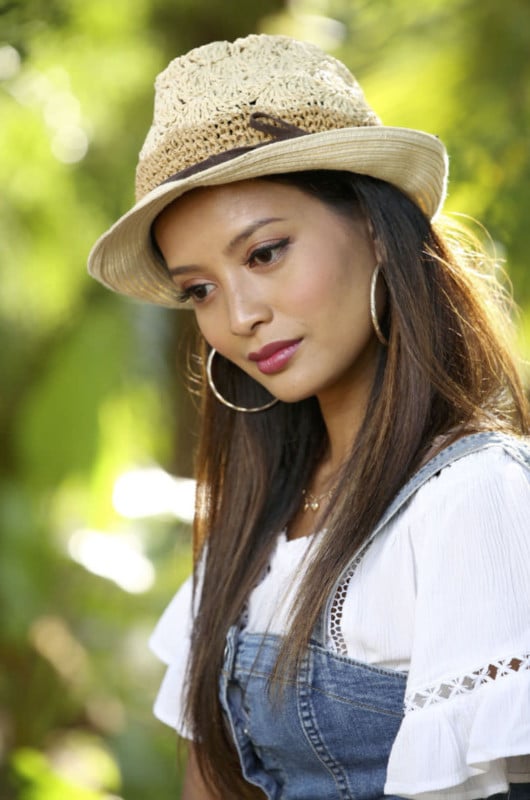 If you do this at sunset, you can keep dragging that shutter to a second, two seconds, etc. And that gives you a really deep blue sky that looks fabulous.

That’s the formula to be able to balance your strobes in ambient light outside. So let’s wrap this up. 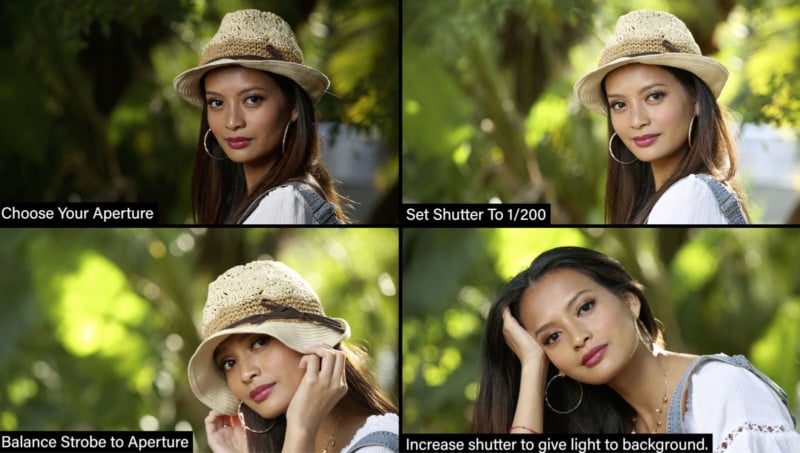 Follow the four steps for balancing strobe light to the ambient light and you’ll get beautiful images quickly, efficiently, and creatively every single time. Choose your aperture, put your shutter at 1/200 of a second. Set your strobes to your aperture then increase the length of your shutter until you like the match between your ambient and your strobes and shoot away. It is that easy.

About the author: Jay P. Morgan is a commercial photographer with over two decades of experience in the industry. He teaches photography through his company, The Slanted Lens, which runs a popular YouTube channel. This article was also published here.