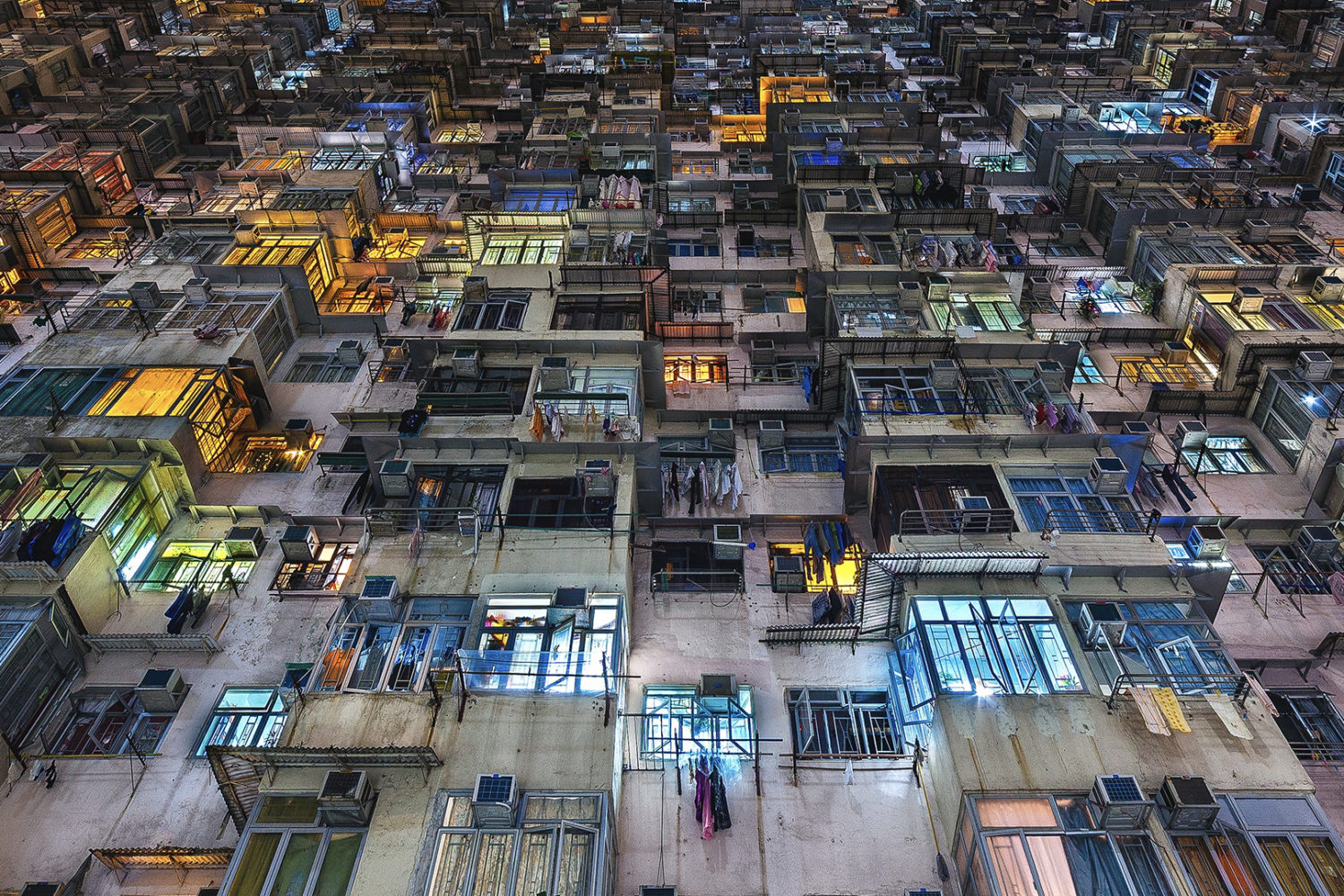 In recent years, social media has transformed the way we experience our cities, with a new generation of shutterbugs traveling the world in search of photogenic locations. Places like Choi Hung estate in Hong Kong, the Vessel in New York, and the Playground Duperré in Paris have grabbed eyeballs and headlines after dozens of photographers captured them for every angle imaginable. Today’s architects don’t just design spaces to be functional; they create them to be seen, photographed, and shared.

20th-century photographers like Ezra Stoller, and Bernd and Hilla Becher paved the way for this generation of architecture enthusiasts, but we doubt even they could have envisioned the massive influence of architectural photography in 2021. From the fearless urban explorers topping roofs and climbing buildings to the drone pilots soaring above our cities, architecture photography has never been more diverse or electrifying than it is today. We curated this collection of 15 pictures that caught our attention, sent shivers down our spines, and made us do a double-take. 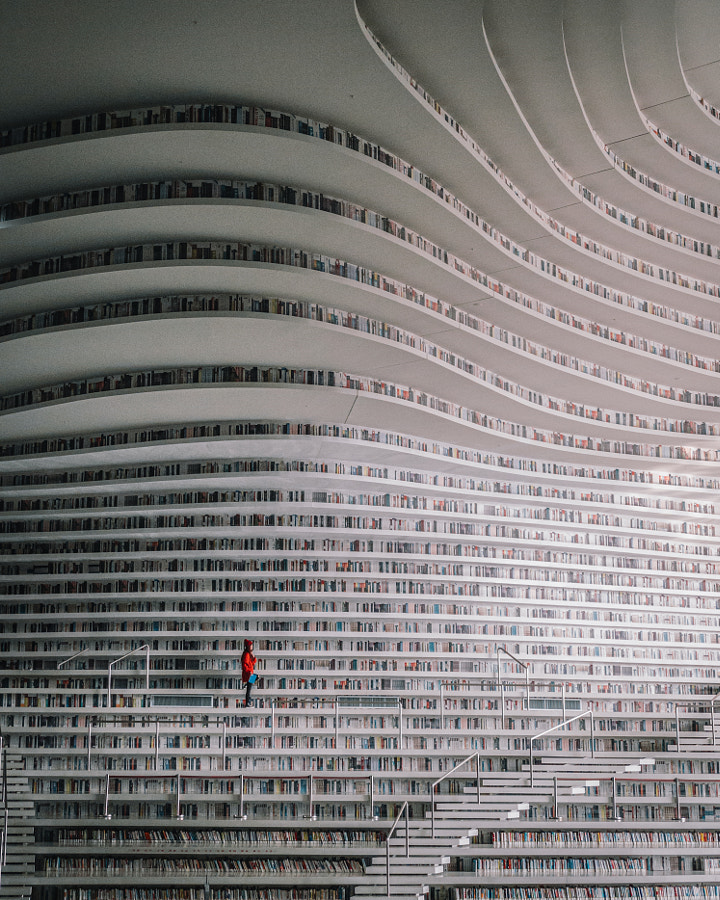 The Tianjin Binhai Library in China, photographed here by Tristan Zhou, is known for its futuristic design, eye-shaped atrium, and “book mountain,” which doubles as seating and stairs.

According to CNN, the library, designed by the Dutch architectural firm MVRDV, saw 10,000 visitors in its first week after opening. While the five-story library can house more than a million books, many of the spines you’ll see in the atrium are actually printed images, giving the playful illusion of books. It’s here that visitors can meet, mingle, and read. 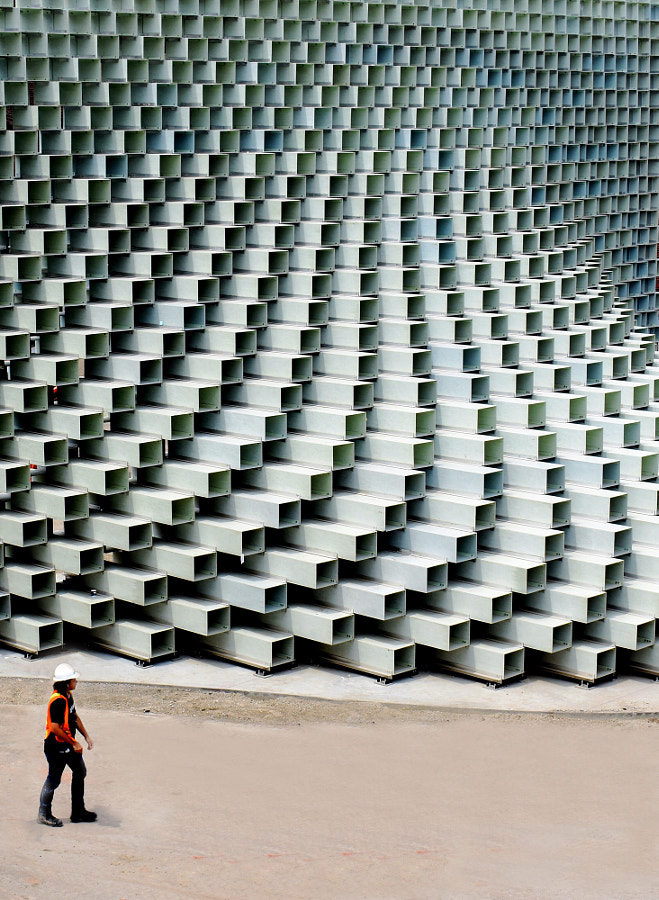 Ash Camas photographed ‘Unzipped Toronto,’ a temporary installation by Bjarke Ingels, founder of the Danish architecture firm BIG, in 2018. Originally debuted as the Serpentine Pavilion in 2016, the “unzipped wall” was constructed using more than 1,800 fiberglass frames. The installation in Toronto, a riff on the traditional brick wall, reached 46 feet tall and 88.5 feet long. It was made open to the public through November of that year. “This is a photograph of office clerks still sitting in the office after working hours,” the urban explorer and photographer 19TONES remembers. “It’s been a while since I explored Moscow. This shot was taken in February 2017 from a neighboring rooftop. I reckon this is the best one I could ever take.” The skyscraper in this photo is one of two that form Moscow’s Federation Tower, one standing at 63 stories and the other at 87 stories. 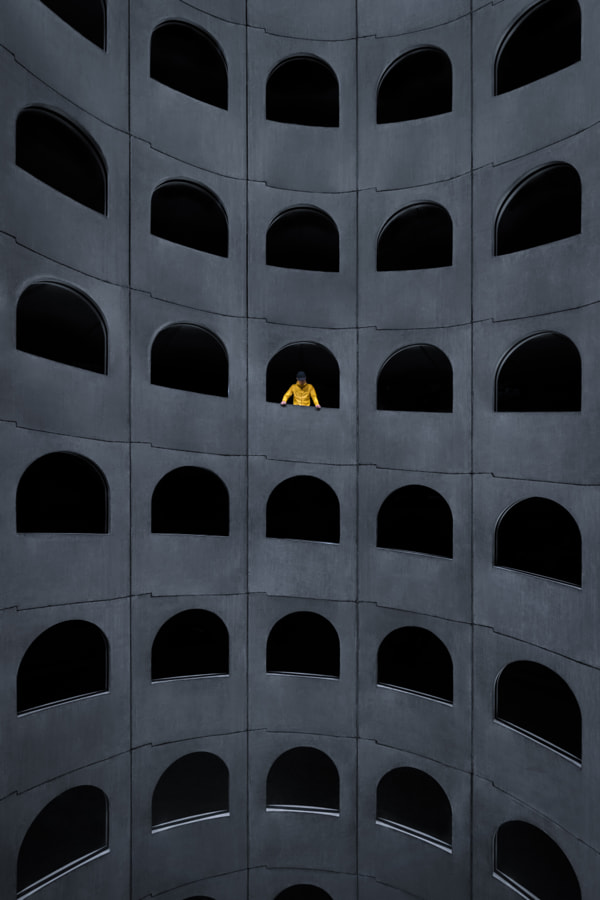 Believe it or not, Delphine Gaudin took this picture at a car park in Lyon with her friend Sylvain. There are twelve car parks in Lyon designed by artists; Parc des Célestins was designed by architects Michael Targe and Jean-Michel Wilmotte, and artist Daniel Buren. Since the park is underground, it’s illuminated by a light well, reflected by a rotating mirror at the structure’s base. 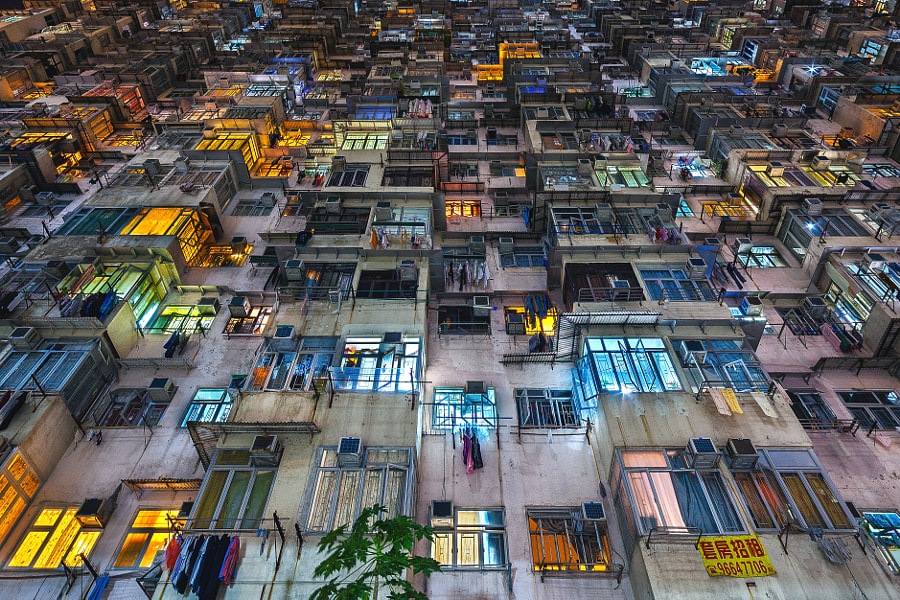 “[These are] the infamous Yick Cheong buildings in Quarry Bay,” says Peter Stewart, who created this photo as part of his series ‘Stacked – Hong Kong’. “I first visited this place back in 2011, and it instantly cemented into me a profound fascination for the unique style of architecture employed in the old neighborhoods of the city.

“Since then, it has gone on to be featured in numerous films, such as Transformers 4 and Ghost in the Shell (both of which I assisted with in location scouting for Paramount) as well as becoming arguably the number one Instagram spot in the entire city.” The complex dates back to the 1960s, when the top floors were used for residences and the lower ones for shops. 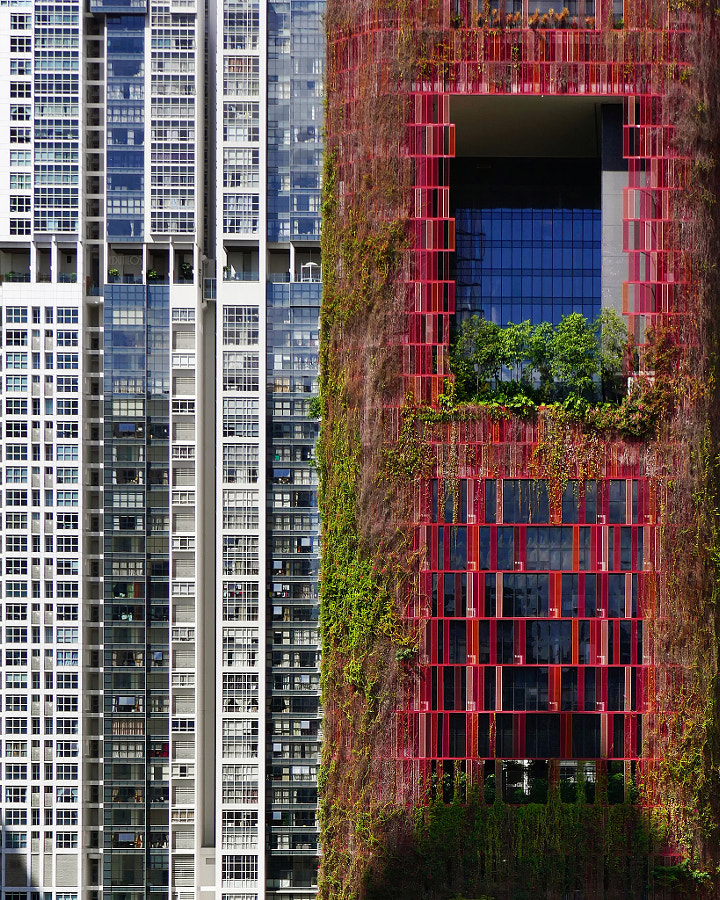 WK Cheoh created this flawless composition using the Oasia Hotel Downtown in Singapore’s Central Business District. In contrast to its surroundings, the building was designed by WOHA architects as a “living tower,” filled with greenery, drenched in natural light, and meant to be a haven for urban wildlife, including birds and insects who visit the flowers. The red aluminum mesh was selected to complement the shades of green. 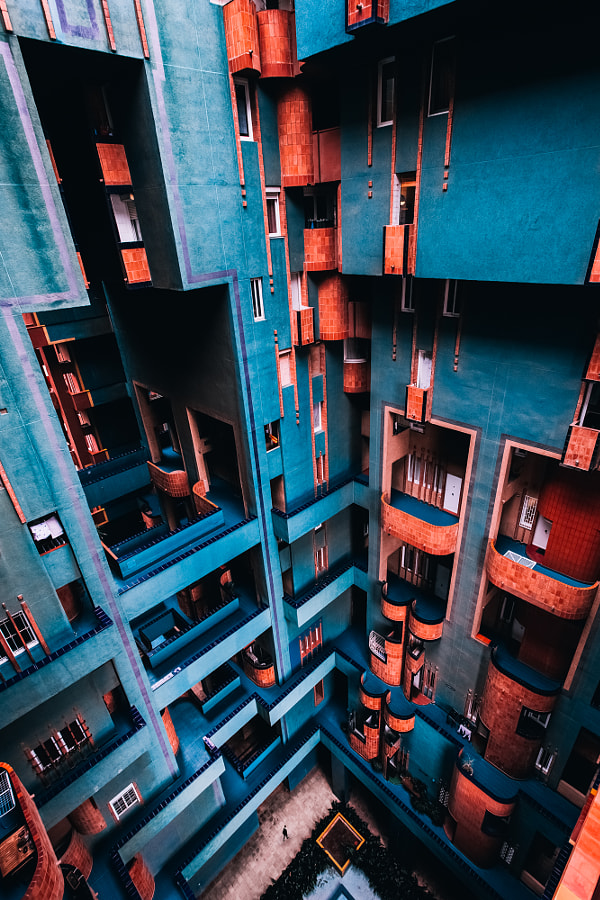 Walden 7 by the one and only Ricardo Bofill, photographed here by Philipp Götze, is a 15-story apartment building in Barcelona, known for its red exterior, five courtyards, two swimming pools, and vivid blue and turquoise interior facade. Meant to inspire a sense of community, it was built in 1975 and named after B. F. Skinner’s sci-fi utopian novel Walden Two. 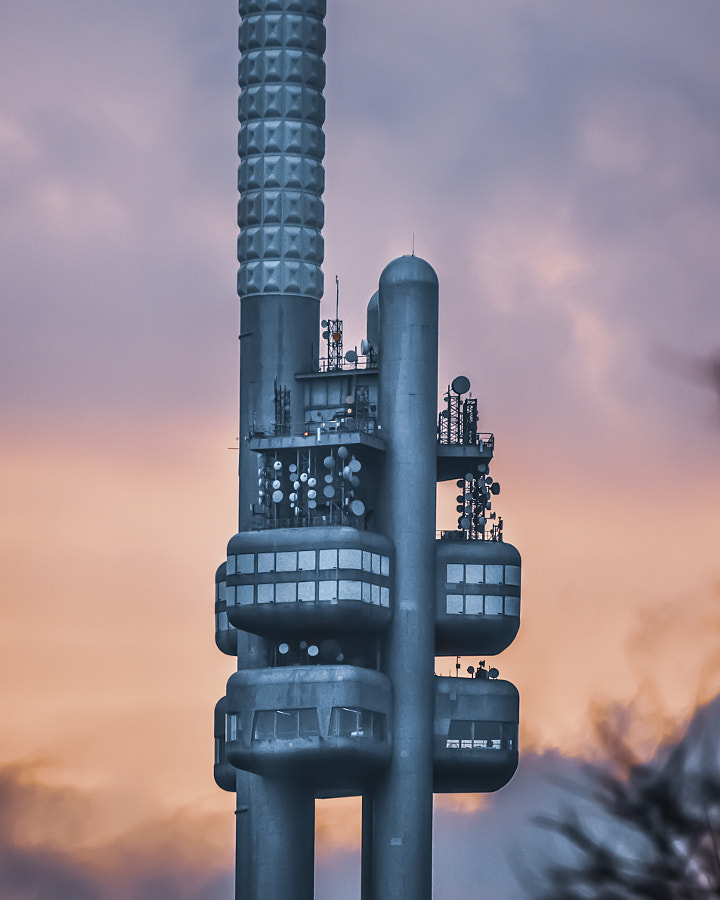 The Žižkov Television Tower in Prague, envisioned here by the artist Jonas Leonas, reaches 216 meters over the city. Designed by Václav Aulický and Jirí Kozák, it was built between 1985 and 1992. In addition to being the tallest building in Prague, some consider it one of the ugliest in the world, though public opinion seems to have softened over time.

Today, visitors can head up to the observatory for stunning city views or stay in the tower’s one-room hotel (for a price). The Czech sculptor David Cerný famously put ten giant fiberglass “Babies” on the tower in 2000. The original sculptures were removed in 2017, but replaced with heavier ones in 2019. 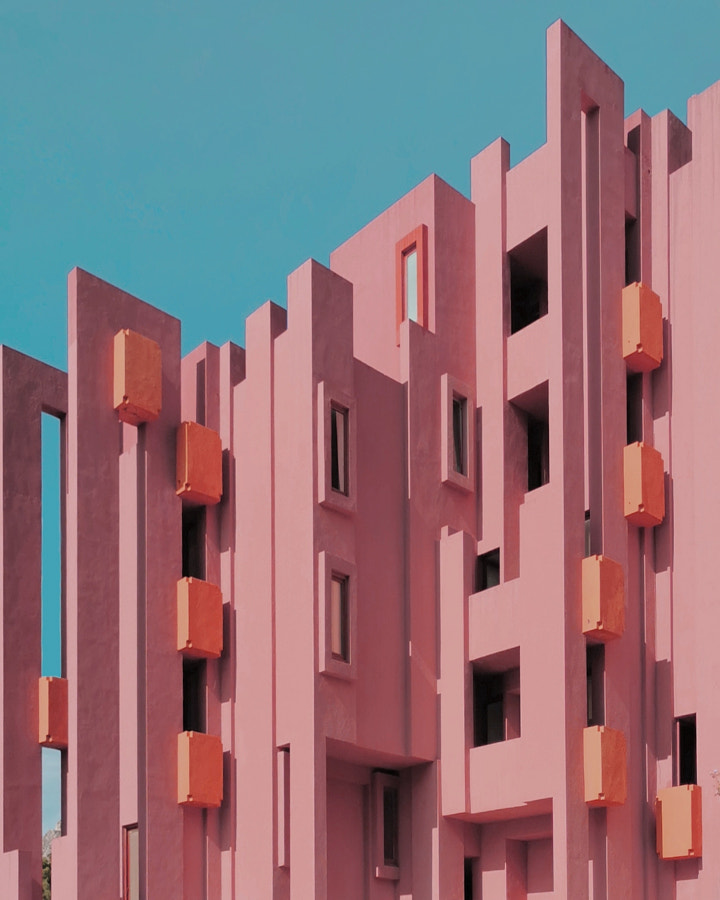 Julia Isaak created this minimal abstract while visiting La Muralla Roja (The Red Wall) in Calpe, another creation by Ricardo Bofill, who was inspired by traditional North African kasbahs or walled citadels. The housing estate is instantly recognizable for its bright colors, radical geometry, Escher-esque internal stairs, and cliff-top location, the latter offering a view of the Mediterranean Sea. 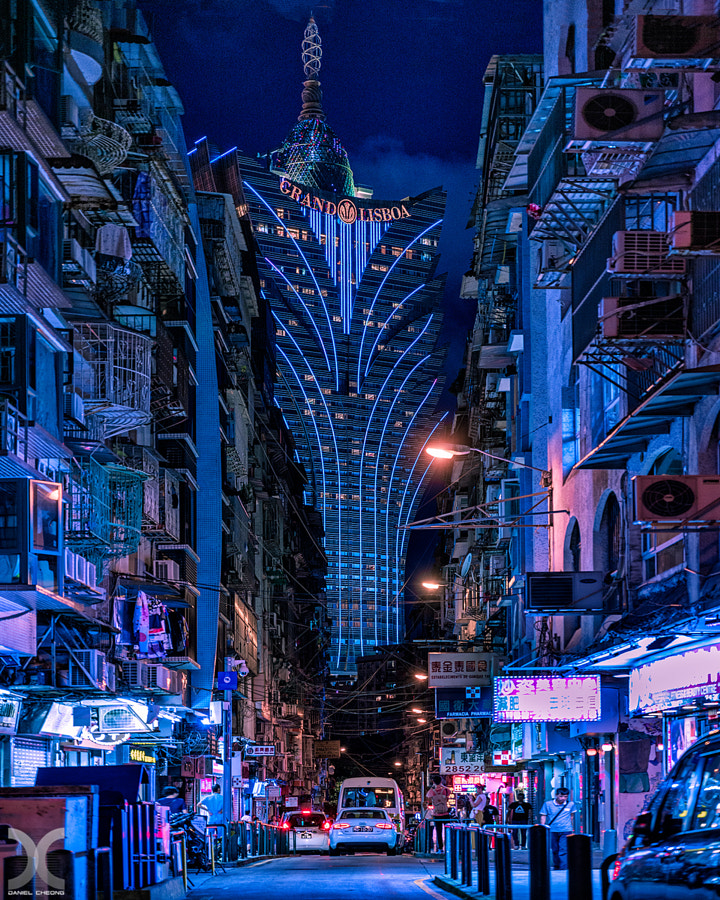 From the old streets of Macau, Daniel Cheong spotted the illuminated Grand Lisboa casino hotel. As the tallest building in Macau, the feathered structure, designed by Hong Kong architects Dennis Lau and Ng Chun Man, forms an integral part of the skyline of the place known as the “Las Vegas of China.” Today, Macau’s architecture is a one-of-a-kind mix of Chinese temples, Portuguese tiling, and this postmodern landmark. 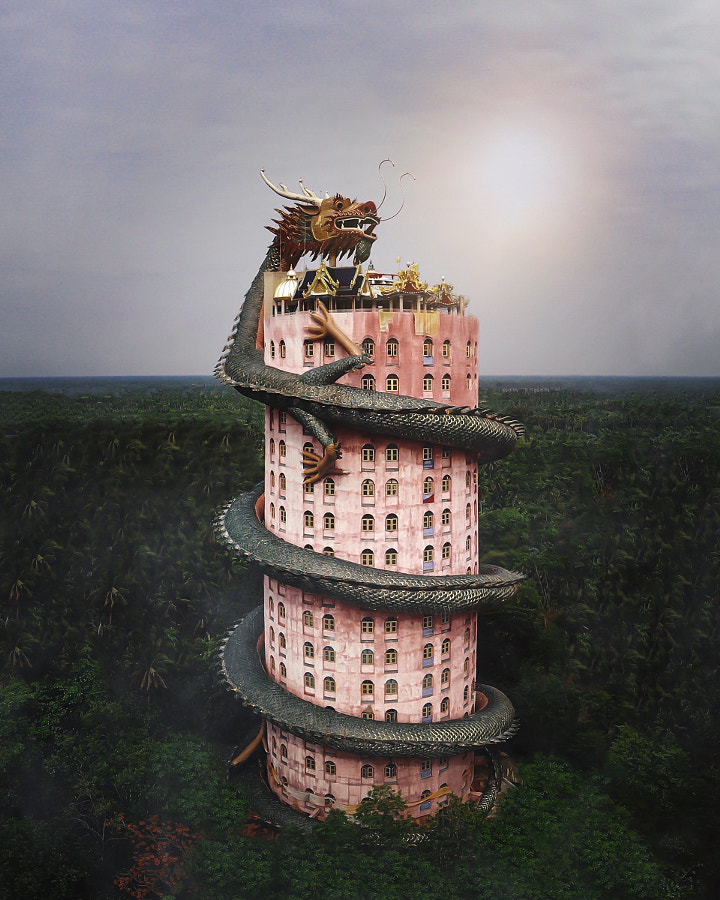 Spanning 17 stories, the Wat Samphran Buddhist Temple in Thailand, photographed here by Kosuke Kurata, can be identified by the sprawling dragon encircling it. It extends for 80 meters, symbolic of the Buddha’s eighty years of life. Off the beaten path, the shrine only recently became popular among tourists. A few lucky visitors have even walked inside the tunnel that stretches through the dragon’s body, but most have contented themselves with climbing the temple itself and touching the dragon’s beard and talons. 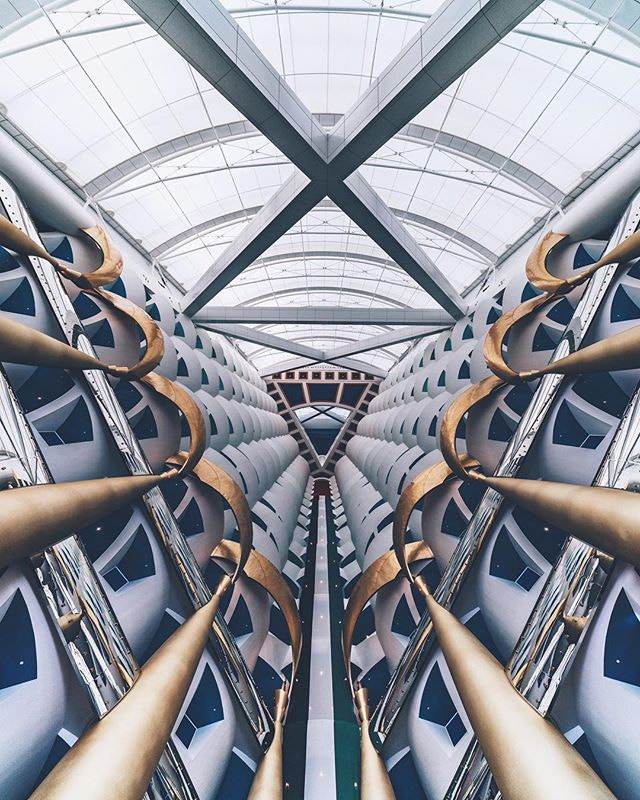 Tobi Shinobi traveled to Dubai to capture this staggering view of the atrium at the Burj Al Arab hotel. Dreamed up by KCA International founder Khuan Chew, the hotel’s interior architecture drew inspiration from the landscapes and culture surrounding the building. Here, you’ll find the tallest atrium in the world, adorned with ocean blues and pillars gilded with gold. 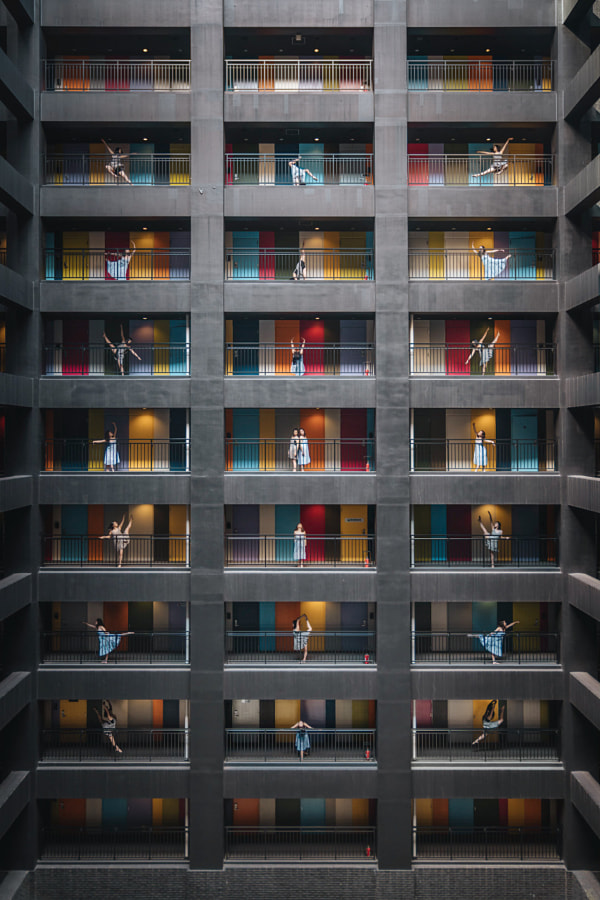 Ivan Wong took a fresh approach to a much-photographed office building in Tokyo by introducing dancers into the architecture. The Soho building in Odaiba is a collaborative workspace, famous for an inner courtyard and colorful doors, which span 13 floors and are illuminated at night. You can see this part of the building from the lobby or the balcony of a neighboring building. 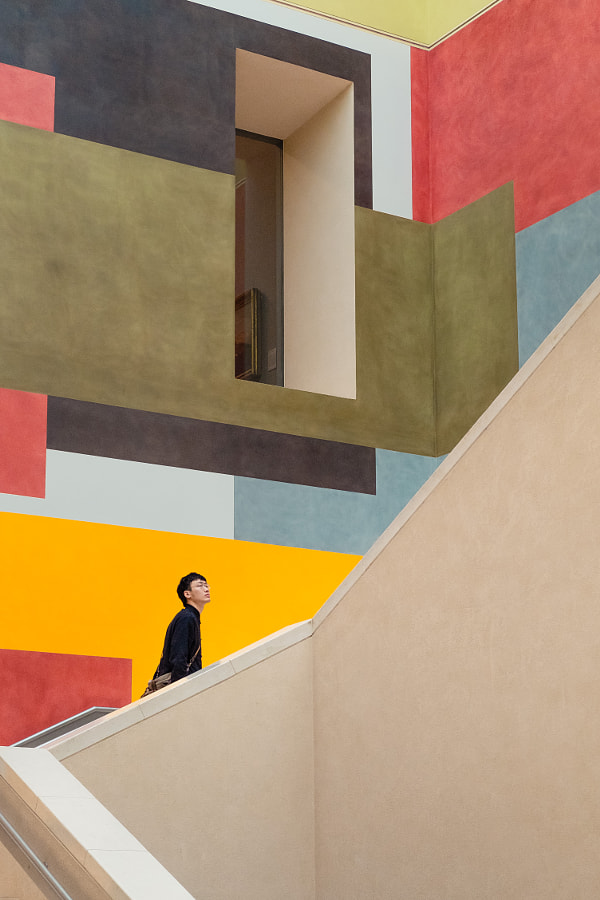 The street photographer Craig Whitehead, also known as Sixstreetunder, captured this moment at the Tate Britain. To create this painting at the Manton staircase, the artist David Tremlett and a team of assistants rubbed pastel crayons onto the wall by hand. The piece was commissioned in 2011, and Craig waited for this picture-perfect moment six years later. 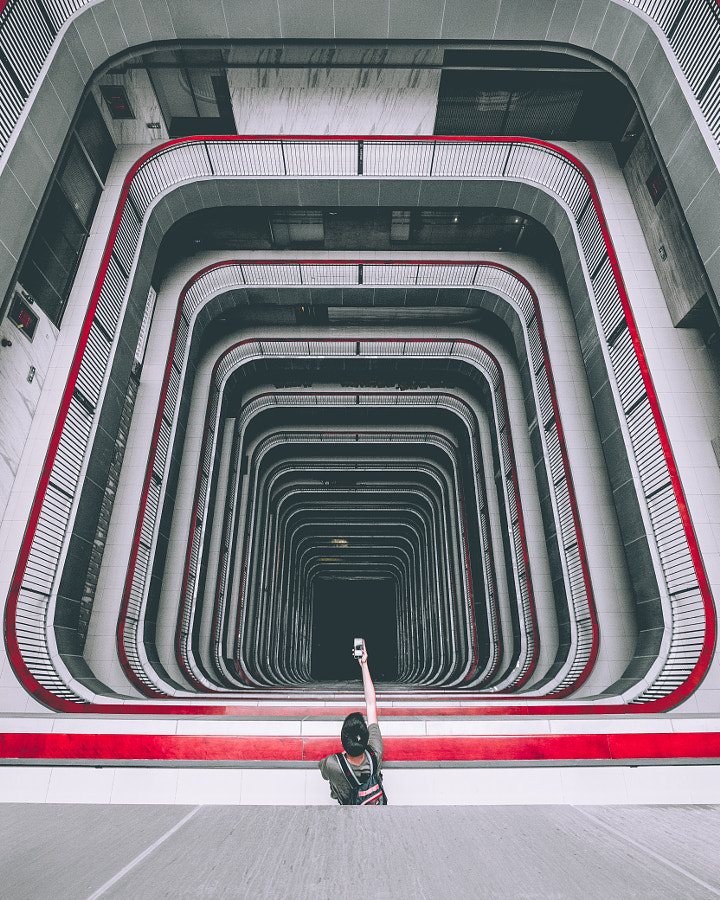 Yik Keat Lee made this picture while exploring Shenzhen, China. It’s a spot that’s been photographed over the years by several influential cityscape artists, including Jennifer Bin and Vitaly Tyuk, but the exact location remains a bit of a mystery. If you want to find it, you’ll have to go looking for it.